BlueClaws One Win From Repeat 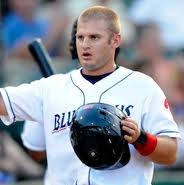 LAKEWOOD, NJ- In a game pushed back one day due to rain, it took until the very last at bat to decide who would have the advantage heading into the final day of the South Atlantic League Postseason, as the Phillies affiliate, the Lakewood BlueClaws, played host to the Red Sox affiliate, the Greenville Drive.

The team affectionately known around the region as "The Cardiac 'Claws" locked down their 14th walk-off win of the season when mid-season All-star Jeremy Barnes singled to drive home the go ahead run that gave Lakewood a 2-1 win.

In the home half of the 9th, Jiwan James led off with a single and was moved over the 2nd on a Michael Dabbs sacrifice bunt. Slugger Jonathan Singleton was intentionally walked, to set up a force play with one out. Lakewood catcher Sebastian Valle then flied out, setting the stage for Barnes' shining moment against Greenville reliever Dennis Neuman.

"To have a walk-off hit in a game like this is huge. This is the highlight of my season, by far," Barnes told the media after the victory. "(The walk-off win) has been out forte this year. That gives us a lot of confidence."

"As soon as I hit it and I saw the trajectory of it, I knew it was in and I got excited. I knew we had a fast runner on second and I almost forgot to touch first, but I promise I definitely went back and touched it."

Barnes, an 11th round pick in the 2009 amateur draft, credited the coaching staff for keeping the team motivated to win throughout the season. "Hats off to (Mark) Parent and Legger (Greg Legg). They've kept us gelled all year and we've been pretty consistent for the most part."

Greenville plated their run in the 4th inning, when third baseman Kolbrin Vitek hit a blooper behind second base against a drawn in infield that fell in for a single and plated Zach Gentile, who reached on a single and moved to third after a wild pitch and a balk by Colvin. The BlueClaws clapped back in the bottom of the same frame, tying the game on an RBI hit by Keoni Ruth that scored Barnes.

Righty reliever Luke Wertz pitched 2 shut out innings, retiring all 6 batters he faced, to earn the win. Wertz was not interested in earning a win for himself, he was only concerned with the team getting a victory to move ahead 2 games to 1, in the best-of-5 series. "Personally, I don't care (about earning a win for myself)...as long as we're winning. We did what we've been doing all year at home and that's win when it counts," Wertz said.

BlueClaws manager Mark Parent felt that Friday's win was the biggest of all the dramatic wins that the BlueClaws have recorded this year. "This was the biggest one of them all. I'd have to say that half of these walk-off wins have started with James at the plate. The more times he's on base, the better chance we have to score," Parent said of his speedy lead-off man.

Greenville's lefty ace, Drake Britton (2-3, 2.97 ERA) will face Lakewood's Jonathan Pettibone (8-6, 3.49 ERA) in game 4 at 4:05pm Saturday. If necessary, game 5 would be played 30 minutes following the completion of game 4. Greenville needs to sweep both games to win the SAL championship. However, if Lakewood wins one on Saturday, they will become the first team since 1994, when Savannah did it, to win back to back South Atlantic League titles.