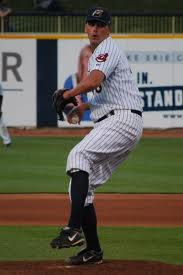 LAKEWOOD, NJ- Every young ballplayer grows up wishing he could play for his favorite team. Mike McGuire has an opportunity to do just that after signing with the Phillies organization in July.

McGuire was a 43rd round draft pick taken by the Cleveland Indians in the 2008 amateur draft out of the University of Delaware. Early scouting reports liked McGuire's abilities, despite some arm trouble. He advanced as far as High A Level Kinston last season. While there, he posted an 0-3 record with a 5.46 ERA in 9 games, 8 of which were starts.

The Indians weren't happy with McGuire's efforts this spring and released him. McGuire caught on with the Sussex Skyhawks of the independent Can-Am League, where he stayed in shape and pitched against other formerly affiliated minor leaguers. As a starter with the Skyhawks, McGuire went 3-4 with a 5.29 ERA in 8 outings.

From there, just as all players in those independent leagues hope for, the 24-year-old McGuire got noticed. The Phillies were looking for an older prospect who could slide into a relief role, and they called the Sussex squad to purchase McGuire's contract.

Since being assigned to the Phillies Class A affiliate Lakewood BlueClaws on July 15th, McGuire has contributed a considerable amount. In 16 games, the right-handed hurler has posted a 1-1 record with 4 saves and a 2.86 ERA while striking out 33 batters in 28 1/3 innings. Manager Mark Parent and pitching coach Steve Schrenk had the confidence in McGuire to insert him into the closer's role. "I'll take the ball anyway I can. Whether it's starting, middle relief, or closing, if they have trust in me, I can get the job done," McGuire told PhoulBallz.com in an exclusive interview.

The BlueClaws are headed into the South Atlantic League playoffs beginning Wednesday and will attempt to repeat as league champions.

McGuire, who wasn't even on the team when Lakewood initially clinched its playoff berth by winning the first half division title but closed out the win that locked down the second half title this week, is proud of his teammates. "We've got a good group of guys and for them to win the first half and the second half, it's a great accomplishment," McGuire stated.

"It's good that we're still playing the way that we're capable of, to finish the season, so we can carry that momentum into the playoffs."

Standing 6-feet-7-inches tall and weighing around 240 lbs., McGuire was a sizable force on the basketball court and on the football field growing up, but he chose baseball as his primary focus because he grew up in a baseball family.

Mike's father, a Philadelphian, taught Mike the ins and outs of baseball and got him on the right track regarding his sports fandom. Mike credits both of his parents with helping him stay focused on working hard as a professional.

Over the years, the McGuires have been there to teach and support their son, from little league to the pro's. Their presence at games helps Mike appreciate his spot and he couldn't be happier. "For them to come to the games and show their support, there's nothing like it. My dad loves baseball more than anything, especially the Phillies. Having them at any game is definitely a privilege."

A life-long dream come true is exactly how McGuire describes his opportunity to pitch in the Phillies organization. "I'm excited to get on the ball field every single day," McGuire said.

"I'll work my tail off for this organization, because this is the team I grew up wanting to play for and wanting to win a World Series with."

Anonymous said…
Hi there, I found your blog via Google while searching for first aid for a heart attack and your post looks very interesting for me..
January 21, 2011 at 4:39 PM