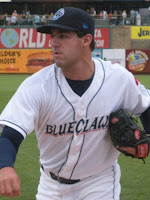 LAKEWOOD, NJ- In a game where minimal news worthy occurrences took place for the home team, the item most worth reporting turned out to be something that didn't happen.

Pitcher Brody Colvin, who was named the starter for game 1 of the playoffs by manager Mark Parent this week, failed to back up third base on a triple by Augusta designated hitter Alexander Burg. Parent has a strict rule for pitchers...if they neglect their duties of backing up throws to the bases, their outing is done as soon as a reliever is ready to enter the game. It took reliever Luke Wertz just one at bat (Juan Martinez, who walked) to get loose, at which point he took over for Colvin.

"It's a rule. You put your head down and start thinking about your own stuff...there's a place to be and a place to go and Colvin wasn't there," Parent stated after the game.
"We're still developing people and that's just a rule of mine."

Tuesday night's start against the Giants affiliate Augusta was to be Colvin's last game, a chance to tune up, before the post-season. However, with the Lakewood pitching rotation in somewhat of a mix-and-match mode (Eric Massingham will make his first start of the season after appearing in 33 games in relief and Sunday and Monday's starters are yet to be determined) until the playoffs begin, Parent admitted that he is now considering using Colvin against Kannapolis at home, over the weekend. That would likely cause the rotation of Colvin, Trevor May and Jonathan Pettibone in the post-season to be adjusted.

Colvin took the loss, as Augusta was victorious by a score of 6-2. Colvin got no help from Wertz, who allowed both inherited runners to score. Colvin's final line looked like this- 4 innings, 6 hits, 3 earned runs, 1 walk, 4 strike outs. Parent stated after Tuesday's contest that Colvin was set to thrown just 5 innings, before being pulled early.

Augusta's hurlers, Andy Reichard, Jose Valdez and Jose Castillo, held the BlueClaws to just 4 hits and 2 runs all night. Reichard, a right-hander, looked solid throughout, as he retired 15 straight BlueClaws batters after hitting lead-off man Jiwan James and giving up a single to Michael Dabbs, in the opening frame. Centerfielder Skyler Stromsmoe botched a throw toward third base following that Dabbs safety, which allowed James to score.

The other Lakewood run came in the 6th inning, when small-framed shortstop Alan Schoenberger broke up Reichard's stretch of downed batters by leading off the 6th inning with a homerun that caught his manager off guard. "I was surprised because he didn't look so good in the at bat before that. He had a chance to hit the ball if it took a better hop," Parent jokingly said of Schoenberger's weak looking effort striking out on a Reichard pitch in the dirt, to start the 3rd inning. "Every now and then, they throw one in his wheel house and he throws his hands. He's very capable. He's a strong little guy."

Schoenberger, a native of Queensland Australia is now batting .260 with 5 homers and 35 RBI this year- all season highs in his four-year professional career.