By Jay Floyd February 24, 2009
Graefruit League baseball games won't start till tomorrow. However, there are a few Phillies who have already found ways to compete and have fun, after growing tired of drills and practice. 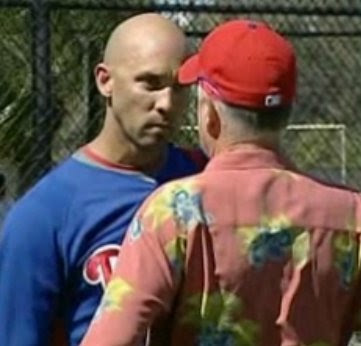 Raul Ibanez vs. Pat Gillick- Staring Contest! They are stiilllll going. Stay tuned to your PhoulBallz network to see who blinks first. 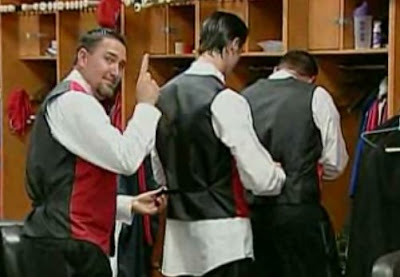 Over the weekend, the Phillies played dress up. Here, Scott Eyre is seen helping Colbert Hamels with his attire and reminding everyone that the Phillies are #1.

MLB.com reports that Phils reliever Scott Eyre is suffering great financial setbacks because he invested money with scammer Robert Allen Stanford. Federal regulators have frozen assets tied to Stanford, and this includes accounts belonging to Eyre, and other MLB players, while the investigation is ongoing.

Jersey Hardball said…
Ibanez was a curious signing by the Phils, considering his age. Your thoughts?
February 27, 2009 at 2:33 PM

Jay Floyd said…
I like the addition of him as a player. I would certainly have preferred keeping Burrell, after all the pay days for similar free agent OF's were said and done.

Burrell's, Abreu's and Garrett Anderson's contracts really leave the Phillies looking like they overspent HUGE on Ibanez.
February 27, 2009 at 2:58 PM