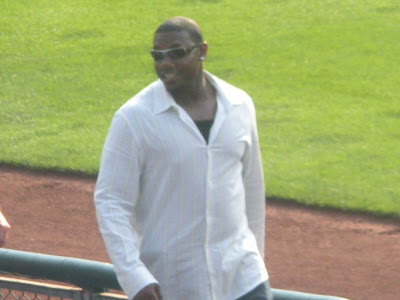 The Sunday School series is pre-empted due to #6 news. Ryan Howard has officially avoided arbitration and signed a 3-year contract with our Phillies, sources confirmed.

General Manager Ruben Amaro said, Sunday, “We're very pleased to have avoided the arbitration process, not just for this year, but also for the next two. Ryan is clearly one of the top power hitters and run producers in the major leagues and is a very important part of our championship club.”

Ryan's contract breaks down this way...$15 million in 2009, $19 million in 2010 and $20 million in 2011. It is also packed with incentive bonuses, including one of the most ridiculous we could have expected to see- $50,000 for winning the Gold Glove Award. Seriously? Ryan Howard has a GOLD GLOVE incentive in his contract? Is this a joke?

With that never reachable incentive listed, the Phils should have included some of the following bonuses for Howard.

That list could go on and on. Another note worthy clause in the contract is a $1 million bonus paid to Howard, by the Phillies, if Howard is traded prior to November 1, 2010. That sounds like a pretty unique, but fairly logical request by the player.

Ryan Howard has been in Clearwater, Florida, the Phillies spring training home, for weeks, working out long before the mandatory day for pitchers and catchers to report (Feb. 14). In fact, Howard was the only big leaguer in Clearwater prior to President Obama's inauguration.

Amanda said…
Good deal. Possibly saving money in the next few years too with this deal.
February 9, 2009 at 3:24 PM