War of the Words, and some non-media created news 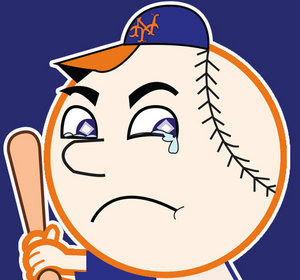 There is loads of news coming out of spring training this week. Most of which is from the Phillies' home of Clearwater, FL, but some is from Port St. Lucie, FL, where the Mets train. The New York media continues to ask every Metropolitan possible about the remarks of Jimmy Rollins in past years (about our Phils being the team to beat), and the statement by Cole Hamels, in December, to a NYC radio station about the Mets being "choke artists". It seems that the Metropolitans players are getting a vibe from all the media questions that the Phillies players are speaking about the Mets endlessly, when the fact is that the only material going is from the reporters who wish to build this rivalry, in order to get page views, sell papers, and gain viewers for NYC sports programming.


Carlos Beltran was nice enough yesterday to state the Mets' desire to end Cole Hamels by saying, "The only thing I know is that he will be watched every time he faces us. Hopefully, we kill him..." Jose Reyes gave some comments today on the World Champions. Reyes said, "We don't worry about Philly. I don't know why they worry so much about the New York Mets. They can talk about whatever they want to, because we worry about us. They are the one to win the World Series, not us, and we don't say nothing about them. " Oh, you all don't, huh? Ryan Church saying last week that the Mets are coming for the Phillies, isn't talking about the Phillies? Francisco Rodriguez borrowing the famous phrase from this rivalry and proclaiming that the Mets are now the real team to beat, isn't calling the Phillies out? Beltran wishing to kill the World Series MVP isn't the Metropolitans talking about the Phillies? And then Reyes, the guy who just said his team doesn't talk about or worry about the Phillies, going on to blab about how Shane Victorino celebrates and how other Phillies (presumably Ryan Howard, among others) stand at home plate and watch their own homerun balls leave the park, don't count as a Met talking about or worrying about the Phillies? Wow. That's a large amount of talk about the Phillies, by the Mets, that doesn't count at all. The Mets are pretty accustomed to doing a lot of stuff that doesn't count, in the end, so that is seemingly their style. Way to hold it down, New York Mess. 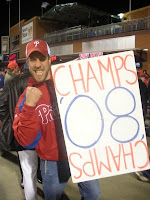 Hall of Famer Mike Schmidt is in Phillies camp this week, before he leaves to assist with coaching duties for Team USA in the World Baseball Classic. Schmitty was asked today who would win a series between the 1980 World Champion Phillies and the 2008 World Champion Phillies. He had this to say: "Probably these guys. Bigger, stronger, faster. Yeah, no doubt in my mind. It would go seven games. It would probably turn on a Schmidt error. Bowa picks it up, throws to first, and Bruce Froemming calls him safe. And the '08 team wins in a controversial play that's talked about for years." Hmm, more Schmidt vs. Howard debate, anyone?


Scott Lauber, Comcast Sportsnet, and other sources have unveiled the cover of next week's Sports Illustrated that features Cole Hamels. Colbert's star shines brighter all the time. Next stop- shutting those awful Metropolitan cry babies the heck up? 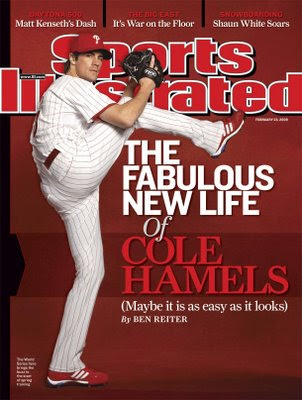 Lefty pitcher Mike Zagurski (elbow ligament surgery) expects to pitch this spring, and has asserted his desire to be ready to contribute, whether in the majors or minors, by opening day. Also, Chase Utley is said to be further along in his rehab from offseason surgery than teammate Pedro Feliz.

The Lakewood Blueclaws announced yesterday, in a joint promotion with the Trenton Thunder, that all kids, 12 and under, will eat for free at every home game this season. The teams are recognizing the financial crisis facing many New Jersey families and this is their way to help, as they continue providing a great value for baseball fans. Lakewood GM Will Smith said, " We really couldn’t be happier to do this." Smith went on to add that he hopes all Blueclaws phans will Get Jiggy Wit It because his Parents Just Don't Understand. The Blueclaws open their season at home on April 9th when they host both the Delmarva Shorebirds AND the World Series Trophy.