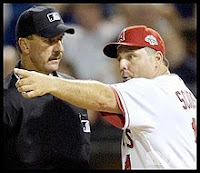 Tim McClelland, the Major League umpire famous from the George Brett pine tar incident, was the guest speaker at an Iowa baseball dinner last week and he had some interesting things to say about the steroids issue, in his sport. Here are some gems, from McClelland...

"I'd like to see people kind of get over it. It was part of that era. In 2004, baseball instituted the ban on steroids. The previous 15 years, you just have to realize there were a lot of people taking steroids."

"They used it to make themselves better. I can't fault a player for doing that."

The Brett/pine tar incident was during a 1983 game with Brett's Royals visiting Yankee Stadium. While trailing in the 9th inning, Brett smacked a homer off closer Goose Gossage, and gave the Royals a lead. The Yankees knew of Brett's habits of adding too much pine tar (a legal substance used on bats for grip), too far up his bat. The Yanks chose a crucial time to point it out, and Tim McClelland reversed the homerun, and called Brett out. McClelland was also on the umpiring crew during the game when Sammy Sosa was discovered to be using a corked bat, in 2003. Sosa was ejected and suspended for using the lightened, doctored bat, which is designed to help batters swing the bat faster.

Tim McClelland is certainly familiar with cheaters and enforcing rules. And we're all familiar with the fact that using performance enhancing drugs, that are illegal in the United States, is cheating. So, why is McClelland so quick to say, "Let's forget it and move on"? Because for all those years, especially following the strike in 1994, the MLB organization was lenient with drugs, on purpose...hoping that increased offensive outputs by players like Sosa, Barry Bonds, and more, would bring back fans who may have been turned off by the strike or found other forms of entertainment. Let's attribute that to the Selig Administration. During the 1990's into the 2000's, to Commissioner Bud Selig, baseball without sterioids meant baseball with less fans, which translates to less revenue. Thus, MLB continued on a lengthy stretch of ignoring the illegal substance use through its core, and every one in the organization, including the on-field rules moderators known as umpires were involved. McClelland proved it is hard to break those old habits of ignoring.

If a man who is supposed to uphold the rules of baseball can speak so aloofly about players cheating, and assert that fans have obligations to move on, who is left that gives a good gosh darn about the purity of baseball?

**********************
UPDATE...a phew Phillies news notes worth mentioning.
1- Jamie Moyer, Joe Blanton and Joe Bisenius are scheduled to pitch in the Phillies' first Grapefruit League game this coming Wednesday against the Pirates. Carlos Carrasco and "Jay" Happ are slated to pitch Thursday in Clearwater against the Blue Jays. According to Scott Lauber of The News Journal, Colbert Hamels won't pitch till March 4th. The Phillies' 2009 television debut, on Saturday, will see Adam Eaton, Kyle Kendrick and Brad Lidge get time on the mound.
2- Todd Zolecki announced today, on MLB.com, that the Phils will be featured in a reality program on the MLB Network. MLB Productions has been in Phillies training camp, filming footage of the team's relief pitchers. The program, called The 'Pen, will debut June 1st, and will run for 6 weekly episodes.
3- MLB.com also features an article today about two prospects, in Phillies camp, that are hoping to contribute as a battery for the Austrailia team at the World Baseball Classic. Right handed pitcher Drew Naylor and catcher Joel Naughton, both former BlueClaws, are waiting for the final roster cuts for the Aussie squad.