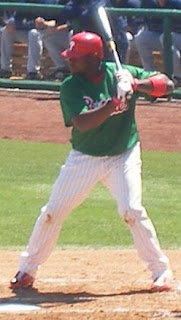 Just pondering all the news and events going on lately, it really seems like a HUGE sports week. The NFL Pro Bowl was last weekend. The NBA All Star events and game are next weekend. Alex Rodriguez admitted to taking illegal performance enhancing drugs this week. Wrestler Chris Jericho was bombarded by fans after a WWE show, then was filmed shoving a female fan to the ground after she spit on him. The annual Sports Illustrated Swimsuit Issue was launched this week. One of the biggest rivalries in all of sports, Duke vs. UNC men's basketball, sparks up this week, with both teams in the national top 5. Actress and MLB.com blogger Alyssa Milano will release a book this year, with a foreword written by Dodgers manager Joe Torre. All star shortstop Miguel Tejada has been charged with lying to congress during steroid investigations in 2005.

But even with all those big stories in the news, the only one that I really care about is SPRING TRAINING BEGINS IN 3 DAYS for our Phillies.

Amanda said…
So much going on...