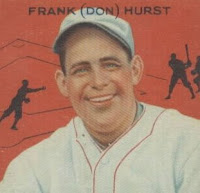 Frank O'Donnell (Don) Hurst played for the Phillies from 1928-1934. Hurst was acquired from St. Louis in 1928 for catcher Jimmie Wilson. Promptly, Hurst was installed as the everyday Phillies first baseman where he would excel. In his very first game as a Phillie, Don Hurst reached base all four times, going 2-for-2 with a triple and an RBI.
Hurst was one of the rare guys who could hit for both power and average. In 1929, Hurst had his career season high in homers, when he hit 31, including at least one in four straight games. 1929 also marked the first of two seasons when Hurst would drive in 125, or more, runs...and it was the first of four straight seasons in which Hurst batted over .300.
In 1932, Hurst had his best year. He led the National League in both RBI and batting avg. (143, and .339, respectively). For that performance, Hurst felt that he deserved more money. Thus, he held out the following spring, missing training camp, and he never again delivered such high-end performances.
In 1933, Hurst's numbers were way down. He hit 16 less homers than the previous season, his RBI's dropped by 67, and his batting average was 72 points lower. In 1934, when Hurst got off to another slow start, he was traded to the Chicago Cubs, for Dolph Camilli. The Camilli trade proved great for our Phillies, who gained great offense in Camilli (over his 3 full seasons with the Phils, Dolph averaged over 26 HR's, over 88 RBI and had a .285 avg.), and shed Hurst, who was out of MLB following the 1934 season.
Hurst went on to extend his playing career in the minor leagues in the American Association and the Pacific Coast League. He also managed a bit in the low minors, before officially retiring from the game that he loved.