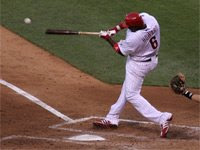 According to recent reports, the Phillies are confident that they can avoid arbitration with Ryan Howard. There is no confirmation whether the agreement would be a one-year or a multi-year deal. If an agreement can not be reached in the coming days, a panel of 3 arbitrators will hear arguments from both the team and the player, next week, and decide on either the Phillies' offer of $14 million, or Howard's requested $18 million.

Two local BC Sports Collectibles will be hosting Phillies player autograph signings this week. BC Sports in the King of Prussia Mall will have Chris Coste signing autographs this Wednesday night, 2/4 at 6:30pm. And on Saturday, 2/7, Jamie Moyer will be at the Oxford Valley Mall starting at noon.

There are 11 days till the 63rd year of spring training baseball begins in Clearwater, Florida. Jamie Moyer is 46 years old. Ryan Madson has changed his jersey number from 63 to 46. I have no idea if those numbers are all related, but this is a nice little paragraph and I hope you learned something from it.

Madson appeared on MLB.com programming last week and told host Noah Coslov that his jersey #63 is retired for Valleyview High School in California, where Madson helped win the championship in 1997. Ryan has been wearing the same number since high school. 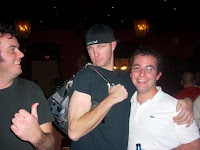 Madson also said in the interview that the #1 thing to change in his life since the World Series victory has been that he realizes how Chase Utley, Ryan Howard and Jimmy Rollins feel on a daily basis...he gets recognized where ever he goes all over Philly and South Jersey. It may not be the championship. Perhaps it's the purse!

Phormer Phillie Bobby Abreu's list of potential teams seems to be growing every few days, with Ed Wade and the Houston Astros now interested. The Mets are also reported to have more than a little interest. Abreu will turn 35 before the season begins and his numbers are as solid as ever (20 homers, 100 RBI, 22 steals last season).

Phillies Phantasy Camp is in full swing this week. Dave Hollins, Mitch Williams, Mickey Morandini and Bob Dernier are all on hand in Clearwater to teach the phantasy campers, as well as play along with them.

Amanda said…
I think getting a deal done with Howard is gonna be tough. He'll go to arbitration.
February 3, 2009 at 3:13 PM