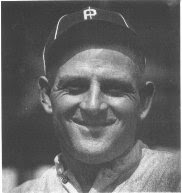 Another Sunday, another lesson. This week, we'll talk about a premiere slugger from the Deadball Era, Gavvy Cravath. Clifford "Gavvy" Cravath joined the Phillies in 1912, when he was 31 years old. The "Deadball Era" was a stretch in the early 1900's, when pitchers were known to throw many trick pitches and games were regularly played with a single mis-shapened ball. These factors made hitting for distance quite a challenge.

Gavvy was a rightfielder. He batted right and threw right. Born on March 23, 1881, Gavvy became the first major leaguer from the San Diego area. While playing ball in his younger days in California, Cravath picked up his nickname by hitting a seagull (which is gaviota in Spanish) with a batted ball.

Gavvy's pro career began with the Angels of the Pacific Coast League. He made his major league debut with the Boston Red Sox in 1908. Prior to that season, Cravath's contract had been sold to Boston, where he bacame a 27-year-old rookie. Then began a series of moves for Gavvy and tough road to Philadelphia. In August of 1908, Gavvy's contract was sold to the Chicago White Sox. In 1909, Cravath started off quite slowly with the White Sox and he was traded to the Washington Senators, who sent Gavvy to the minor league Minneapolis Millers. In 1910 and 1911, Cravath excelled with the Millers, leading the American Association in batting avg., hits, HR, and doubles BOTH seasons.

Rules at the time, made it rather difficult for Gavvy to reach the majors again, and reportedly a clerical error in a telegram was his real ticket to Philadelphia in 1912. He replaced veteran John Titus as the everyday RF. In 1913, Caravath batted .341 with the Phillies and led the NL in hits, homeruns, total bases and RBI.

Cravath led the National League in homeruns 6 times from 1913-1920. In the Phillies' World Series season of 1915, Gavvy led the league in many offensive categories, including HR's and RBI. At the time, Gavvy's 24 homers in 1915 was a MLB record for a single season in the 20th century. The Phillies lost the 1915 World Series to Cravath's former team, the Boston Red Sox in 5 games.

In 1919, Cravath took over as player/manager of our Phils midway through the season. The Phils roster, in those days was quite weak, and two straight last place finishes in 1919 and 1920, led the Phillies to fire Gavvy. He then went on to play and manage two more season in the minors, after which, he retired to his native California, where he later served as a Laguna Beach city judge for more than 35 years.

IRONPIGPEN said…
My attendance at church and my grades in school would have been much higher would they have spent more time with history lessons like this!
February 1, 2009 at 5:10 PM