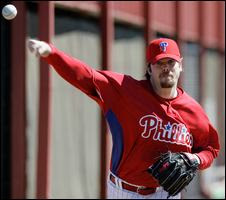 Adam Eaton is still owed $9 million by the Phillies. Yeah, NINE MILLION DOLLARS. His salary for 2009 is $8.5 million, and there is a buy-out option for 2010 at $500,000. GM Ruben Amaro Jr. has made it clear that Eaton is not in the running for the 5th spot in the Phillies' pitching rotation. Eaton has accepted his own current status, as he's aware of the terribleness that is himself. Eaton, a former first round draft pick of the Phillies, is 14-18 with an ERA of 6.10 over the past two season for the Phillies.

When asked about the possibility of accepting another minor league assignment, Eaton had this to say, "If we get to that point, I'll be released. And I don't think that's the end of the world by any means. It would be kind of prudent not to trade for me. I'm not going to accept another assignment. It doesn't take a rocket scientist for another GM to maybe wait and take your shot at getting me for less than a trade would be."

Eaton also added, in regard to the internal race for the last starter spot and the likelihood of him not being a Phillie this year, "...I just have to get ready for a season. I'm not going to shortchange myself or my teammates now or in the future. If it's a season here in Philly, so be it. If it's a season somewhere else, that's the way it is."

Most of us noticed Eaton's absence from the post season celebrations and the parade, but did you know that Adam Eaton watch the Phillies' World Series run from his home? "I definitely watched. It was the most baseball, regular season, postseason, that I've ever watched probably since the Atlanta Braves in 1991 or '92. It was definitely weird. I had my own little celebrations, running around the house when (Joe) Blanton hit his homer. It was fun to watch, but at the same time, it was definitely weird to watch it (on television)...", Eaton said Friday.

The rest of the pitching staff has all arrived in Clearwater for the first official day of spring training. Tomorrow, the repeat begins.