By Jay Floyd August 03, 2011
In a tremendous effort, Kyle Kendrick went 8 shut out innings in Colorado on Tuesday night to lock down the Phillies' 70th win of the season, as Philadelphia downed the Rockies by a score of 5-0. In the outing, Kendrick allowed just 4 hits and 2 walks, while striking out 7 batters.

Recently, it has been suspected that the right-handed Kendrick is in danger of losing his starting spot, as veteran hurler Roy Oswalt is slated to return soon from the disabled list. Kendrick would likely move into a relief role, at that point.

Since some of my favorite Twitter folks and I summed up the significance of Kendrick's performance and the Phillies' current status, on the social networking site, I thought I would share some information direct from the tweeterverse. Check it out below. 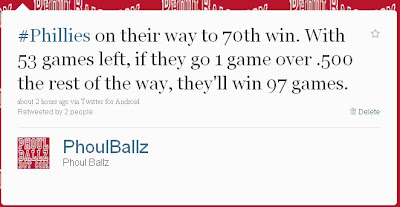 Just prior to the completion of the win, I pointed out how mediocre the Phillies could become, through the remainder of the season, and still finish with an incredible record. 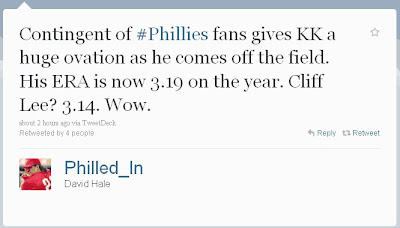 Beat reporter David Hale offered up some facts pertaining to a couple of Phillies' hurlers. 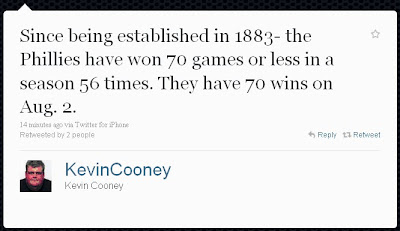 Another media mack Kevin Cooney dished out some very interesting info on the Phils clubs of the past that failed to exceed the 70-win plateau. 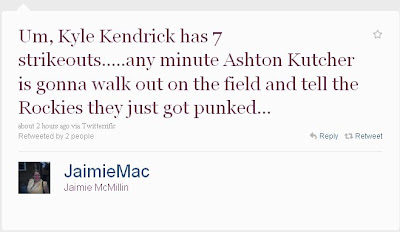 A good friend of PhoulBallz.com, Jaimie, delivered a pop culture reference, albeit one that was backdated 5 years, to express the shocking production that Kendrick had served up. 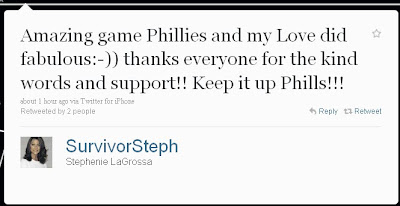 Even Kyle's wife took time to jump in and share some remarks about her sweet little "KK".

Lastly, Coastal King Big Stevie chimed in with a terrifically fruity thought that is just too imperative to overlook.

That's all. Thanks to all these involuntary guest bloggers for their insight and glorious manners of expression. You all have a lovely style and I recognize it.