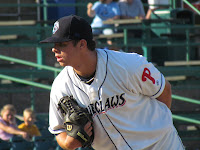 With 1 out in the frame, Biddle served up a 2-run game tying double to highly-regarded Rangers prospect Jurickson Profar, and quickly grasped his knee. Biddle, the Phillies' 1st round draft selection last year, was tended to by the team's training staff and walked off the field with a limp, under his own power.

Lakewood coaches were not able to provide details of the injury between games, but updates should be available shortly after tonight's regular season home finale at FirstEnergy Park.

Biddle, 19, was named to the South Atlantic League Post-season All-star team on Tuesday. In his first full season as a professional, Biddle entered action on Tuesday with a 7-8 record, a 2.94 ERA and a .218 batting average against in 24 outings this season with Class A Lakewood.

The start for Biddle, who was already on a 5-innings-per-outing limit, was likely going to be his last of the season. A source stated that if the club missed the post-season, which seems likely, Biddle would not have taken his next turn in the rotation in the team's final game of the season on Monday in Hagerstown.

Biddle is slated to spend time in the month long post-season Instructional League, but that assignment could be in jeopardy, depending on the severity of the leg injury.

According to Biddle, he'll be returning home to Philadelphia and visit a Phillies team doctor on Wednesday or Thursday. Biddle explained that the knee was causing him some discomfort through the entire outing, but he experienced a greater level of pain when he broke to back up home plate on Jurickson Profar's run scoring hit in the 5th inning.

"My knee locked up on me out there," Biddle stated. "It just didn't feel good the whole game and running home to cover behind home plate really made it stiffen up and it didn't really loosen that well for a while, so I just had to come out of the game."

Biddle, who gave up 2 earned runs over his 4 1/3 innings in the contest, admitted that this injury would end his season and expressed displeasure with going out on a down note.

"(My teammates) keep telling me, 'Don't focus on this last outing.' But I just wanted to finish strong and today was a day we could have made our final push for the playoffs, and I just didn't pitch as well as I wanted to."


In a related note, the BlueClaws other Post-season All-star representative, first baseman Jim Murphy, was also sidelined with an injury. In the bottom of the 7th inning of game 2, Murphy came to the plate with 2 runners on in a tie ballgame. After fouling a pitch, the 25-year-old experienced pain in his left hand and was unable to continue. Catcher Cameron Rupp was called upon to pinch hit, and, thanks to a throwing error by Profar, helped the BlueClaws salvage a win and avoid a season sweep at the hands of Hickory.