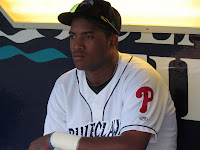 Critics already had their fun with the details of last month's deal that saw the Phillies send their top two prospects to Houston for All-star outfielder Hunter Pence. Many have said the price was too high for a Pence who is "good, but not great". Others stuck by the old "prospects aren't proven commodities" argument. But with Monday's news that another top ten prospect from the Phillies' organization was being sent to the Astros, those determined to critique the trade will have more to gripe about.

Sources confirmed for PhoulBallz.com early Monday afternoon that 19-year-old outfielder Domingo Santana is heading to the Astros as a player to be named later.

The 6-foot-5-inch 200-pounder is often regarded as a five-tool talent. Scouting himself, Santana declares that he is a power hitter. He also asserts that the recognition that has come his way, by multiple outlets naming him among the Phillies' best prospects, has helped him to focus and strive to become better.

Santana, a native of the Dominican Republic, was signed in 2009 at the age of 16. After debuting in the professional ranks that year, Santana batted .288 with 6 HR and 28 RBI in 37 games with the Gulf Coast League Phillies. The following season, Santana split time with the Class A Lakewood BlueClaws and the short season Williamsport Crosscutters. In 103 combined games, Santana posted a .211 batting average with 8 HR and 36 RBI in 103 games played.

This season, the righty hitting Santana has shown improvements, posted a .269 average with 7 HR and 32 RBI in 96 games as a member of the BlueClaws.

The key for Santana's progress will be his ability to improve when hitting against left-handed pitchers and spreading out his hits, according to Lakewood hitting coach Greg Legg.

"Santana really comes in and works every day in the (batting) cage," Legg said recently. "The two areas for me, where's he's got to get a little better at, is obviously hitting off left-handed pitchers and, you know, using the whole field a little bit better, because he has great power the other way. Sometimes he tends to pull the lefties, with runners in scoring position.

"If those two areas improve, and I think that comes with experience, he'll be more successful. Other than that...he's hitting for a higher average, he's hitting the ball hard, he's still showing the power."

On July 29th, in the initial portion of this deal, the Phillies sent their top minor league arm Jarred Cosart, top overall offensive prospect "The Boss" Jonathan Singleton and right-handed reliever Josh Zied to Houston for Pence, who has already proven valuable to the big league lineup (.327 avg, 3 HR, 11 RBI, .926 OPS), in two weeks, with the defending National League East division champions, as they hope to reach the World Series for the third time in four years.

Surely, if the Phillies can ride the steady production of Pence all the way to their third ever World Series title, the trade will prove to have benefited the Phils enough to warrant the amount of star potential they gave up. If they fall short, however, trade evaluators could surely have their fuel to declare the Astros as winners of this talent exchange.

You can learn much more about marketing by just listening to this guy talk. he is such an amazing personality. See as eben pagan releases his master class..
guru blueprint..
August 16, 2011 at 6:23 AM