U of Delaware Product Alonso Earns His Spot 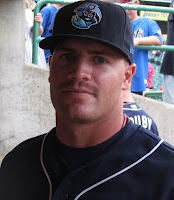 LAKEWOOD, NJ- As the 2011 minor league regular season began and players were assigned to their full-season clubs, infielder Carlos Alonso stayed behind in extended spring training. For months, Alonso, a 32nd round draft pick out of the University of Delaware in 2010, would split playing time with other players, hoping to get an opportunity and get noticed enough to join a roster.

The chance came for the 5-foot-11-inch 205-pound Alonso, once the short-season Williamsport Crosscutters came north in June. Through 5 games in the New York-Penn League, Alonso went 6-for-14 (.429 avg) with 2 doubles and 4 RBI. However, even then, Alonso had difficulty cracking the lineup on a daily basis.

Luckily for Alonso, some roster maneuvering landed the 23-year-old on the Class A Lakewood BlueClaws roster by July 10th. Since joining the two-time defending South Atlantic League champions, Alonso has played in 35 games and sports a .327 batting average with 1 HR, 16 RBI and a .446 on-base percentage.

Alonso, a California native, feels as though the regular playing time with Lakewood has enabled him to develop a greater level of belief in himself which has assisted in his overall development on the diamond.

"I came here with a new confidence," Alonso said, having earned a spot as the BlueClaws' everyday second baseman. "I wasn't playing much in Williamsport and now I'm playing every day. And I'm just taking each day like it's a new start and enjoying it. I'm just confident that I'm going to go out there and have good at bats every day."

Alonso made his professional debut last year with Williamsport, under his current manager Chris Truby, who has expressed excitement over the contributions Alonso has brought to the BlueClaws this year, while asserting his appreciation for the style of Alonso's efforts.

"I had Carlos last year and I like Carlos, the way he plays his game," Truby stated. "He plays hard. He'll run through a wall for you, if he has to. He'll do whatever you ask and he's one of those guys that goes out there and just competes."

Alonso perfected his hard-nosed style at the University of Delaware, where as a senior in 2010 playing primarily as a third baseman, he posted a .389 batting average with 16 home runs. Alonso started all 99 games of his Blue Hens career after transferring from Santa Barbara City College.

In recent years, his proximity to the Philadelphia media market provided Alonso, who grew up as a Giants fan, with considerable exposure to the Phillies, which he hadn't gotten on the west coast. He references the fashion of baseball that the parent club has become best known for and admits that it has rubbed off on him.

"I'd watch the Phillies games on TV every day. I'm a huge baseball fan and it's hard to not enjoy watching those Phillies. (They've been) one of the best teams in the Majors, so it's just fun to watch those guys play," Alonso admitted with a smile.

"They really talk about, in this organization, doing it the Phillie way. And they're just trying to breed winners. I mean, I've been watching the Phillies for a couple years now, three years, four years, and they have winning guys. They're just all about winning. So, I think that's the type of atmosphere they're trying to brew here in the minors too."

In the most recent seasons, playing baseball the Phillie way has included going to the postseason each year. The BlueClaws have lived up to that expectation, locking down SAL titles in each of the past two seasons. To get back to the playoffs, the team has a tough road ahead, over the remaining two weeks of the season, as Lakewood sits in a tie for third place, 4 games behind second half division leader Kannapolis.

However, with two teams to leap frog, a third club in a dead heat and just 13 games remaining, Alonso and his teammates have confidence that the team can make a run toward a three-peat with the help and support of their local Jersey shore area fans.

"We're not thinking so much about the teams we need to jump, we're just thinking about us. We're just trying to bring energy to the park and just trying to play well down the stretch and we always feed off the energy at home. The crowd is awesome, always. We're gonna push it and see if we can get back (to the postseason)."

Lakewood's final homestand of the season begins this Friday, as the 'Claws play host to the second place Hickory Crawdads for a huge five-game series with the season on the line.