Collier and Others Headed to Instructional Ball 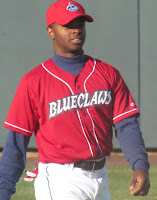 According to Lakewood BlueClaws manager Chris Truby, the Phillies will send 10 members of their Class A affiliate to the organization's spring training home in Clearwater, FL for instructional ball, beginning in mid-September. "Instructs", as they are commonly referred to, is a month-long off-season league, generally consisting of recently drafted players, those that missed time due to injury, or those that participated in a short-season league, allowing those individuals to refine their skills or add innings/at bats to their season.

One prospect that will be going south for the fall is 20-year-old outfielder Zach Collier. According to the 6-foot-2-inch 190-pound California native, a supplemental 1st round pick in 2008 who was out of action for the entire 2010 season due to injuries, the extra month of baseball will allow him to gain back some of the experience he missed last year and provide an opportunity to improve important aspects of his game.

"More repetitions and more at bats are the main things I'm looking forward to," Collier said. "The Phillies also want me to work on some things that I haven't done here in the season, like bunting for base hits. Speed is part of my game, so it's definitely something I should work on."


In other news, with a hurricane in the forecast and their games against Hickory cancelled over the weekend, Lakewood BlueClaws players spent the night in their home clubhouse at FirstEnergy Park on Saturday. That decision was made by the Phillies, who were concerned about the safety of the players that live in various places throughout the area. The organization wanted the full roster accounted for, in one place, throughout the dangerous storm.
_____________________________________