Cloyd and Cisco Excel For Reading

By Jay Floyd August 26, 2011
The Double A Reading Phillies pitching staff, having been led through the first half of the season by the likes of All-star right-hander Austin Hyatt, well regarded prospect JC Ramirez and others, has seen a pair of new arms emerge as leaders as the team makes a run at the postseason in the Eastern League.

As Reading competes for a Wild Card spot in the East division, starter Tyler Cloyd and reliever Michael Cisco have solidified a staff that has been among the best in the league. 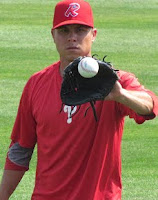 With 3 1/3 innings of scoreless relief in the R-Phils' win over New Britain on Wednesday night, righty hurler Mike Cisco won his 8th game of the season. The 36th round draft pick from 2008 out of the University of South Carolina is the grandson of former Phils pitching coach Galen Cisco.

Reading pitching coach Bob Milacki describes Cisco as a talent that he's been confident in throughout the season. Additionally, Milacki has noticed improvements in Cisco's game since the Phillies chose to alter his role.

"He's been a starter through most of his career, but he's been able to help us out of the 'pen this year and we're happy...(with) his added velocity and other progress he's made out there," Milacki stated. 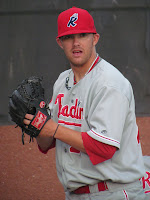 On the other hand, Cloyd was switched the other way, going from reliever to starter. After appearing in 37 games in 2010, only 5 of which were starts, the 18th round draft selection from 2008 has shined as a member of the starting rotation this season.

The Nebraska native Cloyd has earned himself a promotion during each of his four pro seasons, although he started both 2010 and 2011 with Class A Advanced Clearwater. After appearing in two games for the R-Phils last season, Cloyd, who sports a pitch repertoire of fastball/change up/slider, began 2011 back in Clearwater. The 24-year-old righty hurler went 3-1 with a 2.75 ERA in 13 games with the Threshers earlier this season, before stepping back up to Reading in June where he's been a key contributor ever since.

After winning two games last week, Cloyd was named the Phillies' minor league pitcher of the week. Overall in four August starts, Cloyd has posted a 2-0 record and a 1.73 ERA with 31 strikeouts in 26 innings.

Milacki, who first helped Cloyd develop as a pitcher two years ago with the Lakewood BlueClaws, has found Cloyd to be one of his most reliable arms.

"(Tyler) is a hard worker," Milacki said. "He definitely puts in his work and competes out there. He has been a reliable guy for us and he's done everything we've asked."

As the R-Phils, who enter the final ten days of the season 1 game up on New Britain, in sole possession of the second playoff spot in the East division, they'll continue to need some of their lesser known prospects like Cisco and Cloyd to help the club reach the postseason for the first time since 2001.