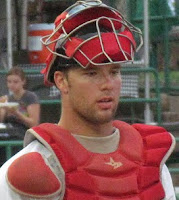 Phillies catching prospect Cameron Rupp has been on a torrid stretch with the Class A Lakewood BlueClaws since the beginning of July. From April through June, Rupp had posted a .225 batting average, but after working hard to improve his stroke, Rupp went 33-for-85 (.388 avg.) from July 1st through action on Friday night.

The 3rd round draft selection from 2010 has been credited as a leader for a BlueClaws pitching staff that featured three All-stars in the South Atlantic League, but the modest 6-foot-1-inch tall 240-pounder does not wish to take any credit for anyone else's success.

As Lakewood enters the final month of the season, the team is in the thick of the second half Northern division race, as the BlueClaws sit 2 games behind the first place Hickory Crawdads (Rangers). The 22-year-old Rupp will be counted on to continue his recent offensive success and help the two-time defending SAL champions reach the playoffs and continue their streak of post-season dominance.

This past weekend, I spoke with Cameron about his hot second half, the team's focus on living up to the previous two years' championships and more.

A couple readers critiqued a recent interview, stating the audio needed improvement. I attempted using a different device and the sound quality got worse, unfortunately. So, please excuse the audio here and try to enjoy the inside access to the Phillies developmental system that you can only get right here. Check out the media player below to hear my latest interview with Cameron Rupp.

coldplayxm said…
He is handsome. Welcome to our website: http://www.northfacesalecoats.com/
November 25, 2011 at 3:18 AM