Checking In on the Return For Lee

As Phillies hurler Cliff Lee dominates opponents with his arm and his bat this year, his full legacy within the organization may not completely be his own. Lee signed a lengthy contract with the Phillies last off-season, but just one year prior, he had been traded by Philadelphia to Seattle for three minors leaguers that are still under the proverbial microscope despite Lee's return.

The premiere target in the December, 2009 swap was right-handed pitcher Phillippe Aumont. The 6-foot-7-inch 255-pound Canadian has had an exceptional season, combined at two levels with the Double A Reading Phillies and the Triple A Lehigh Valley IronPigs.

Aumont struggled initially after joining the Phillies in 2010 after the organization chose to switch him from a reliever into a starting pitcher. Recognizing the issues that Aumont had (3-11 record, 5.68 ERA), after pitching exclusively as a reliever in 2009, he was returned to the bullpen.

The 22-year-old Aumont has a clear take on his huge bounce back year, after what many folks considered to be a bust of a season.

"It was just getting my mind set and forgetting a little bit about last year," Aumont said earlier this season. "It was just taking the positive from last year and eliminating the negatives and whatever happened. And especially making the transition to being a bullpen guy, which is what I wanted to do after the season, made it easier."

Aumont, whose fastball is regularly clocked from 95-96 MPH, is primed to be a key piece of the Phillies bullpen by next season, or possibly sooner as a September call up. 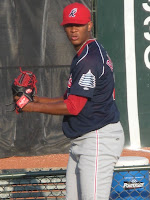 Another prospect acquired by the Phillies from Seattle was right-handed starting pitcher JC Ramirez, who turns 23 years old next week. Ramirez is in the midst of a roller coaster of a season. The Nicaragua native has shown glimpses of command and strength this year, but seemingly has a habit of putting a stop to his own momentum, showing nearly no ability to carry one solid start into the next.

On July 7th, Ramirez threw a complete game against Bowie, allowing just 1 unearned run. His next start against Trenton was the complete opposite, as he allowed 7 earned runs in 2 2/3 innings. After that, on July 19th, Ramirez shut down division rival New Hampshire, earning a win with 7 shut out innings. Ramirez then followed that outing by allowing 6 earned runs in 5 innings against Binghamton.

The 6-foot-3-inch 225 pound Ramirez, who sports a repertoire of fastball/slider/change up, has stated that his own struggles are due to a lack of confidence. Reading pitching coach Bob Milacki's take on Ramirez's ups and downs is that he needs to improve his weapons, but Milacki is still high on Ramirez as a pitcher who can contribute at higher levels.

"Secondary pitches are going to make a big difference," Milacki stated. "(This year) his first three starts he only had like 5 strike outs, even though he was throwing really well. And now he's starting to get more strikeouts. His secondary pitches are improving, but he needs to be more consistent and make each start better.

"He's still young, as a pitcher. This is his first full year in Double A, although he was here a little bit last year. Each time out is a learning experience for him. He needs to learn from his mistakes (to continue to climb upward)." 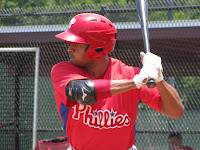 The third player acquired in the deal, Tyson Gillies, has spent more time on the disabled list than he has spent as an active player in the Phillies' developmental ranks. Gillies, a lefty hitting outfielder, missed a large chunk of last season following an injury to his left hamstring. He played just 28 games in 2010, then re-aggravated the ailment this spring. The hamstring issue prevented Gillies from beginning his season until May, when he suffered some brand new physical trauma, injuring his foot by stepping on the defending first baseman's foot while legging out a ground ball, in an extended spring training game.

Gillies, 22, was activated from the disabled list in June, as his hamstring felt fine, but the foot injury was too painful and failed to improve, so he was sent back to Clearwater for more rehab. The Canadian-born speedster has been limited to just 3 official games played this year, going 2-for-13 as a Reading Phillie.

Gillies has been open in the past, stating that his repeated problems with the hamstring were likely due to his own desire to return to action in a quick manner and not allowing proper healing time. With knowledge of that, the Phillies are determined to keep Gillies from making the same mistakes, thus it seems as though he is shut down for the regular season.

While less than a month of the minor league schedule remains, Gillies still stands a chance of getting in some crucial game action this year, as he expects to play in the Arizona Fall League and will likely participate in instructional ball in Clearwater for a month, following the season.

In the future, it's possible that the Philadelphia faithful could see a big league game featuring Lee as a starter, while Gillies makes dazzling defensive plays behind him, as Ramirez awaits his turn in the rotation while studying the lefty veteran from the bench, and with Aumont on tap to close things out after 8 shutout innings. Perhaps that is wishful thinking, but not if you ask the players themselves, who all aspire to be rocking red pinstripes beside Lee in the not-too-distant future.