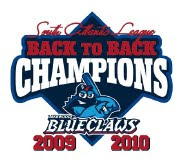 LAKEWOOD, NJ- As the two-time reigning South Atlantic League champions, the Lakewood BlueClaws, strive to reach the post-season, the club has added a pair 2011 draft picks to their pitching staff in order to help the club earn their chance at a three-peat.

In each of the last two seasons, the BlueClaws added a present year draft choice to the pitching staff to help the club, just as they entered the crucial playoff stretch. In 2009, 15th rounder Austin Hyatt helped the team lock down a championship by pitching in all five of the club's postseason victories. Then last year, 35th round selection Eric Pettis arrived in time to add depth to the bullpen for the postseason.

This year, the BlueClaws got their shot of professional rookie adrenaline early, as 8th round draft choice Austin Wright, a left-handed starter, and 25th round pick Ryan Duke, a righty reliever, have joined the team after tremendous debuts with the short-season Williamsport Crosscutters of the NY-Penn League.

According to BlueClaws manager Chris Truby, the team will count on the duo of 2011 draftees, as the season winds down and the team attempts to play catchup in the second half division standings.

"They did very well with Williamsport and are deserving (of the promotion). We'll be counting on each guy to contribute down the stretch for us," Truby said.

Wright, an Illinois native that grew up as a Cubs fan, earned the promotion to Lakewood by posting solid numbers (3-1 record, 3.38 ERA) through 8 outings with Williamsport.

The 6-foot-4-inch 235-pound Wright, who was a JuCo standout and later transferred to Ole Miss, is confident in his approach and feels his improving control is what has helped him succeed thus far in the minor leagues.

"I've been fortunate enough to have my fastball command get better," Wright stated. "I've just been going off of that and trying to get ahead of hitters and using my off-speed (pitches) to kind of keep them off balance."

Duke, a Texan, rode momentum from his college season with Oklahoma, where he is the school's all-time saves leader, into a solid debut in the Phillies developmental system. After six scoreless appearances with the Crosscutters, Duke joined the BlueClaws in July and took over as the closer.

The 6-foot-tall 180-pound Duke, describes the level of success he's had in his first professional season as rather surprising but feels that his own simple plan of attack has been his greatest strength.

"It is (surprising) a little bit. But just going out there and throwing strikes is what I've always been taught to do. So, I'm just trying to get ahead of batters, which has been put in my head since I was about 15 years old, so that's basically what I've been trying to go out there and do and the results have been very good for me."

The 22-year-old, whose full name is Ryan Casey Duke, asserts that he was born to play baseball, as he was named after his family's favorite player, Nolan Ryan, and the famous baseball poem, Casey at the Bat.

Thus far in 17 combined games at both levels, Duke has posted a 0.96 ERA with 7 saves and a .113 batting average against.

While the two newcomers welcome the chance to help the BlueClaws chase a third straight title, the team must first overcome a 5 1/2 game deficit in the SAL standings and leapfrog 4 teams to earn their opportunity to truly defend their crown. It certainly won't be an easy task for Wright, Duke and their teammates, but each one is up for the challenge.

Anonymous said…
Terrific work! This is the type of information that should be shared around the web. Shame on the search engines for not positioning this post higher!
August 14, 2011 at 4:19 PM