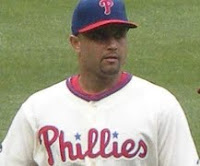 As news dropped that Placido Polanco and Cole Hamels will miss time, the Phillies (78-41) are set to begin a three-game series against the playoff contending Arizona Diamondbacks (68-53).

After Polanco worked out on the field at Citizens Bank Park, the team decided to place him on the disabled list. The All-star third baseman, who has been out of action lately with a sports hernia, tested his body with running and fielding drills on Tuesday, but the call was made to officially place him on the DL retroactive to August 7th. Polanco would then be available to return after just five more days. The move allows the Phillies to add a player to the active roster in the meantime. Surgery is likely in Polanco's future, but he prefers to put it off until the off-season and play through it, as the Phillies head toward a fifth straight post-season.

In addition, an MRI on Cole Hamels' ailing left shoulder revealed inflammation and the team has announced that he will skip his next turn in the pitching rotation. Hamels expects to return for a start next week.

In the clash of first place teams, Philadelphia will send Roy Halladay, who has led the Phils to an undefeated record over his last 10 home starts, to the mound, while Arizona counters with rookie hurler Josh Collmenter, who has failed to win in his last 4 road outings.

Read ahead for info on the pitching match ups as well as more stats from this series.


Justin Upton leads the D-Backs in just about every major offensive category and has earned some attention as a MVP Award contender this season. In 15 career games against the Phillies, Upton is a .320 hitter with 2 HR and 5 RBI.

In 13 career games against the Phillies, Gerardo Parra has a .195 batting average and a .597 OPS.

Kelly Johnson is a .241 career hitter in 59 games against the Phillies. In 23 games since the All-star break, Johnson has posted a .176 batting average.