Greene & Quinn Practice, Plus Other Notes 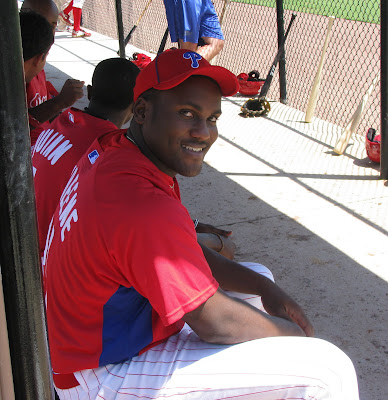 On Saturday morning, supplemental first round draft pick, Larry Greene Jr., dressed and took part in baseball activities as a Phillie for the very first time. Along with second round draft choice Roman Quinn, Greene took batting practice in Clearwater at the Gulf Coast Phillies facility. The two youngsters are sharing schedules for practice, trainer sessions and more.

Reports from multiple pitchers who were present at BP stated that Greene was driving balls for great distance during his first day on a pro diamond. Australian right-hander Josh Warner claimed that Greene nearly hit one over the light tower beyond the outfield fence.

At this stage, it is unclear when Greene or Quinn will see game action with the GCL Phillies, but both players look forward to the opportunity to face suitable competition. Both players could be expected to take part in instructional ball from mid-September through mid-October in order to play more and to be evaluated further.

Greene, an 18-year-old Georgia native, agreed to terms with the Phillies late Sunday night and traveled to Philadelphia on Thursday, where he signed his first professional contract and met current players and team personnel, prior to their game against the Diamondbacks. The Phillies gave Greene, a power hitting outfielder, a $1 million signing bonus.

Quinn agreed to terms just prior to the deadline to notify the commissioner's office, at midnight, Monday. The 18-year-old infielder was widely regarded as the fastest player in this year's draft. Quinn, a native of Florida, signed for a $775,000 bonus.

In other news, veteran Scott Podsednik is also in Clearwater, as he continues to rehab his ailing foot. The lefty hitting outfielder remains optimistic that he could join the Phillies as a September call up. Podsednik told a source on Saturday that he feels great and is ready to play. The 35-year-old last played in the Majors with the Dodgers last season.

Also, injured prospect Tyson Gillies says that he isn't sure whether or not he will play winter ball, however he continues to plan for an assignment in the Arizona Fall League. The 22-year-old was first sidelined this season with a hamstring problem, but later injured his foot in an extended spring training game.