Moyer Might Need to Consider Hanging Up His Spikes 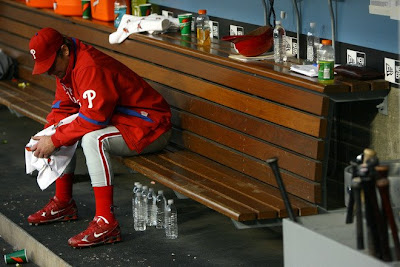 I've read some sour reports and opinions online today about Jamie Moyer. Most are, more or less, leaning toward Moyer being replaced in the rotation. I'm not for that. The WSBGM guys consider Moyer going the route of Geoff Jenkins and Adam Eaton, as guys who were signed to considerable contracts, and were later cut and owed the full amount. Scott Lauber mentioned it, but simply touched on the idea of Moyer being bumped from the rotation in place of "Jay" Happ. Others are not pushing the emergency button yet and simply discussing Moyer's struggles. I'm not that relaxed either. Todd Zolecki quotes Moyer as not being worried, and Charlie Manuel saying "Our pitching is what it is. We signed those pitchers to pitch. Will I stay with them? Of course I'll stay with them."


In just a couple of weeks, the whole Phillies world will reminisce, when on Friday May, 29th, we look back two decades and remember Mike Schmidt's retirement. Schmidt retired in early 1989, when it became clear to him that he no longer was at the top of his game, and he didn't wish to continue playing if he could no longer play at a high level and give his team and his fans what he felt they deserved. The time may be fast approaching for Jamie Moyer to feel similarly to how Schmidt felt.


Moyer's trouble did not worry me through his first several starts this season. I stated this publicly on an appearance I made on The Shore Sports Report on Fox Sports 1310. On May 1st, headed into the first big series of the season against the Metropolitans, Moyer was 3-1 and had a 5.09 ERA. I stated on that day's show that Moyer was a veteran who knew what he had to do to improve, whether it was to adjust his own mechanics, adjust to the home plate umpire of the night, or set his own mind straight. I spoke of how he was like an extra coach, and how he was the least of my own worries in the Phillies rotation. Boy, has that outlook changed. Since then, in 3 starts, Moyer's ERA is 13.87. That has raised his season ERA to 8.15. Moyer has quickly gone from "guy I was most confident would rectify his high ERA" to "guy most likely to make me scream profanity during a game".


In 1989, it took Mike Schmidt less than 2 months to realize that he no longer had it. With a semi-milestone (550 homers) just ahead of Mike Schmidt, when he left the game, Schmidt said, "I could ask the Phillies to keep me on to add to my statistics, but my love for the game won't let me do that." Moyer may seem to be chasing the carrot that is his 250th win. Moyer is sitting on 249 wins for his career right now. At what point might Jamie's love for the game prevail and force him to realize he may no longer offer Major League skills to the Phillies?

Jay Floyd said…
PhoulBallz.com forgot its own birthday! Last Friday was the 1st birthday of this site. Thanks to all of you who read, and drop the comment love from time to time.

This page has come a long way in a year. I am looking forward to an even bigger second year.