Jay-Dubya Stole Our Hearts and Bases Too 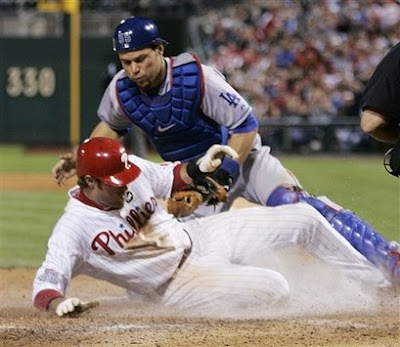 Last night, Jayson Werth led the Phillies to victory, by stealing 4 bases against his former team, the Dodgers....3 of which were in the 7th inning. It's a rare feat to steal your way around the bases, including home. It's only been done by 49 players in MLB history. If you still don't understand how big of a deal this is, just check out the screen capture below. Werth topped American Idol as the top news story on Yahoo this afternoon. For something to bump down weak-sauce competition program results on Yahoo's featured stories, it's got to be huge.

The fine people over on TheFightins.com have all the footage of Jayson Werth's steal of home. Check it out, if you missed it, or wish to see it again.

With Leather has some audio of former Phillie Wally Backman that some will find offensive...but most will find enjoyable and worthy of sharing with all your friends. Check out the web address above.
May 13, 2009 at 4:38 PM