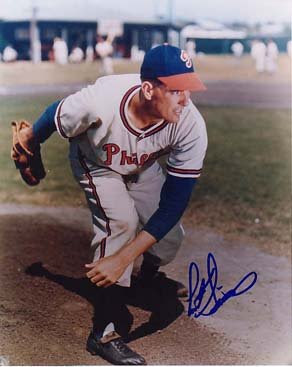 Curt Simmons made his Major League debut for the Phillies at age 18 and, over time, became one of the team's most dependable starting pitchers.

The lefty signed with the team in 1947 for $65,000 following an exhibition game set up by team owner Bob Carpenter. Much to everyone's surprise, Curt Simmons struck out eleven Phils in the game, which ended in a 4-4 tie. Upon signing, Simmons was assigned to Wilmington, in the minor leagues. After striking out 197 batters in 147 minor league innings, Simmons was promoted to the Major League club for the final week of the 1947 season. In Simmons debut, he beat the Giants at Shibe Park 3-1, giving up just 5 hits and striking out 9.

The following season, Simmons had a rough go of it, and started off slowly. In his first start of the season, he struggled to find the strike zone, as he walked 7 of the 14 batters he faced. Over his first two full seasons with the Phillies, Simmons' control hurt him. He was a combined 11-23 in 1948 and 1949.

That magical Whiz Kids season of 1950 was when it all really came together for Simmons, who was still just 21 years old at the time. His record was 17-8 with a 3.40 ERA when he was summoned to military duty in early September. His disappearance from the starting rotation nearly cost our Phillies the pennant. Simmons was valuable to the squad and they missed his skills, but ended up clinching the pennant on the final day of the season.

Simmons of course would miss the World Series in 1950, and missed the entire following season serving his duties to the United States in the Korean War. He returned for the 1952 season and did not seem to miss a step. He went 14-8 with a 2.82 ERA and 1.19 WHIP. His 6 shut outs would lead the National League in '52.

In 1953, Curt Simmons came within a single hit of pitching a perfect game. On May 16th, Simmons surrendered a single to lead-off hitter, Bill Bruton, then retired the next 27 batters, in order, to win the game 3-0.

Simmons pitched for the Phillies all the way through the '50's until he was released after struggling in 4 appearances in 1960. He was later signed as a free agent by St. Louis, and exceeded 195 innings pitched in a season for the Cardinals 4 times, and he helped St. Louis reach the World Series in 1964, with an 18-9 record. His career record with Philadelphia was 115-110, with a 3.66 ERA.