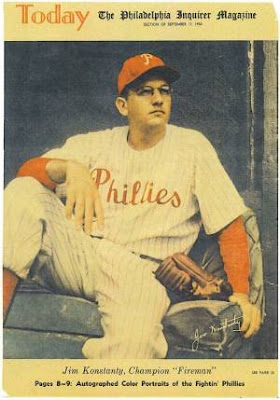 Jim Konstanty was a pitcher with the Phillies from 1948-1954. Early on, Konstanty, was assumed to have little shot at a real career in the Major Leagues. His scholarly appearance and small repertoire of pitches did little to instill confidence in the clubs he pitched for.

Konstanty, whose real first name was Casimir, was a 4-sport athlete at Syracuse University. He did not begin pitching till he had completed college. Konstanty pitched briefly for the Reds in 1944 but Navy service interrupted his progress and the next few seasons in the minors weren't great. Eddie Sawyer took over as manager of the Phillies' triple A team, Toronto, in 1948. Sawyer moved Konstanty to the bullpen, and when Sawyer got promoted up to manage the Phillies, he brought Konstanty up along with him.

In 1949, Konstanty had a break through season for the Phillies and went 9-5 with a 3.25 ERA. 1950, however, was the year that put Jim Konstanty in the history books. That season, the Phillies won their first National League pennant in 35 years, and Konstanty won the National League Most Valuable Player award. In 74 games, all relief appearances, Konstanty had 22 saves and a 16-7 record with a 2.66 ERA and a 1.04 WHIP. He pitched 152 innings that season.

Konstanty relied almost solely on two pitches. A slider and a change up was all he needed to baffle opposing batters. And unlike closers of today, Konstanty was frequently called upon to pitch an extended number of innings. In the second game of a double header on September 16th, 1950, the Phils trailed the Reds 5-0 in the 7th inning, prior to eventually tying the game in the 9th inning. Jim had entered the game in the 8th inning, and went on to pitch 9 scoreless innings before the Phillies won the game in the bottom of the 18th inning. That same season he also pitched 9 innings of relief against the Pirates. His 74 pitching appearances that season was the ML record, at the time.