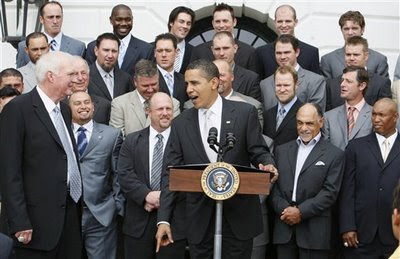 I don't want to see Brad Lidge (back row, directly behind President Obama) with a smile on his stupid face until he gets his sh*t together. Plain and simple.
I also think the next time I hear someone argue, "Well they just won it all, and he saved over 40 games. Cut him some slack", or, "He was perfect last year!" I am going to stab a chest or two.
Being great in the past and performing superbly on previous occasions will only get you so far. If a fire fighter showed up to a big apartment complex blaze and aimed the hose toward the other side of the street, where everything was fine, and allowed the fire to burn out of control while he had his back to it...would we argue, "Aw, don't worry- that's the fire fighter who saved that family of 6, their dog, and 2 cats last October"? No!!! So shut your mouth, softy. Brad Lidge sucks right now and should not be trusted to save games. Good bye.