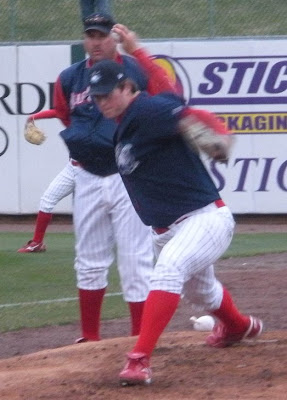 Ryan Bergh is a righty reliever for the single A BlueClaws. Bergh, a side-armed hurler, was a 26th round selection in the 2008 amateur draft out of Old Dominion University. He spent last season with the Gulf Coast League Phillies. In 20 games in the GCL, Bergh led the team with 9 saves and had a 0.64 ERA. Through 10 games this season, Bergh is 2-1 with a 1.80 ERA and 4 saves.
Here's how my Q&A with Bergh went...
Can I get your thoughts on your successful first 5 weeks of the season?
I've just been fortunate, ya know. I've been locating my pitches, and getting guys out. Ran into a little trouble a couple outings back, not locating but, for the most part I'm able to keep the ball down in the zone and get guys out.

Does your arm angle (side arm) help you out? Is that an advantage for you?

I think so. I've been throwing like this since high school, so it's not really that strange for me, but obviously the hitters- it's a little bit different angle. Yeah, I think it gives me an advantage. Definitely.
And something like that would be more successful in relief, right?...so batters don't see you times through the order and become familiar?
Yeah, I think stereotypically a lot of guys with the lower arm angle are used more as relievers. You don't see if as much, so it's more effective. You're not that familiar with it. But as long as you've got good pitches and you're locating stuff, I think it's...not easy, but it's a good way to get guys out regardless of the arm slot.

Fastball, slider and change up. A lot of two seams.

What do you think of New Jersey so far?
Well, tonight was a beautiful night, but we've had a little cold, a little wet weather. But I'm looking forward to when it warms up.

What's your routine like a day after you pitch, or on a daily basis?
Really, because I'm a reliever it's pretty much the same thing every day. We get running in before the game (and) long toss. Just treat every day pretty much the same. Most days, if I go out there and throw 2 innings, I know I'm probably not going to pitch the next day. But even still, I'll just approach the same way and get ready, 'cause you never know- you might go 16 innings, and I might have to throw so...just try to do the same thing every day.

What was your favorite team and favorite player growing up?
It's tough. Being from Florida, back when the Marlins won it was exciting. Fred McGriff was one of my favorite hitters back in the day.

What Major League Park would you most like to pitch in some day?
Of course, Philly! Being affiliated...that's my first immediate goal.

What advice might you give to teen aged players who hope to continue playing baseball past high school?
I think a big thing at that young age is listening to your coaches. I know from myself going through it...maybe it's just the age, you don't want to listen to your coaches necessarily...but, in most cases they know better than the player does. So just working on the drills, the fundamentals, stuff like that, and working on the little things.

What's your favorite music or favorite musical artists?
I'm a big fan of Linkin Park and OAR. I listen to a lot of R&B and rap stuff too.
That's all for now. Check out the Q & A link below for more interviews.