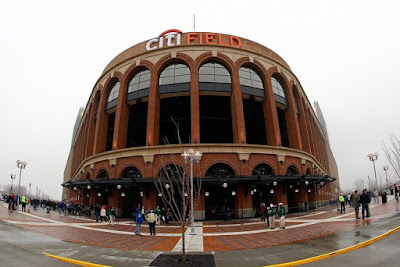 I've spent over an hour this afternoon trying to think of something worth posting that wasn't Chan Ho Park vs. Johan Santana related. I couldn't do it. There's really not anyone around the baseball world that thinks the Phillies will win the first of a two game series in NYC tonight, when the Phillies' worst possible option faces the best pitcher in the National League. Park, who is 0-1 with an 8.57 ERA, will start for our Phillies and will face off against Johan Santana, who was just named NL pitcher of the month for April.

Johan Santana has never suffered a loss to the Phillies. Santana's career stats against Philadelphia- 6 starts, 2-0, 2.85 ERA, .201 batting average against. Some Phillies struggle against Johan (Jimmy Rollins, Shane Victorino, Pedro Feliz and Chase Utley combine for a .121 career avg. against him...8-for-66), while others are not very troubled by the ace starter (Ryan Howard, Raul Ibanez and Jayson Werth combine for a .359 avg. against him...23-for-64).

Park faced the Metropolitans last Friday night and got roughed up. He walked 6 and gave up 7 earned runs in 4 2/3 innings pitched. In 5 games thus far in 2009, opposing batters are hitting .333 against Park. This could potentially be Chan Ho's last turn in the Phils' rotation, as "Jay" Happ continues to perform well in relief, and Kyle Kendrick holds a low ERA at triple A Lehigh Valley.

On the flip side, however, imagine how broken the Metropolitans would be, if they lost this series opener. The Mets are already so fragile that the team has banned local newspapers from the club house, so players won't be subject to the local media critiquing them. If the Phillies can come out victorious on Wednesday night, you can count out the Mets early this year. Your regularly scheduled September choke date four months early!

I still feel as though failing to making adjustments to the rotation and allowing this match up to take place is a mistake by the Phillies coaching staff. All games count the same in the standings. For Cole Hamels to throw his bullpen session and practice fielding & covering first base yesterday, follow it up by saying he "feels fine", but then stick with the delay of his next start, till Friday, is the worst news in this whole scenario. Why doesn't the #1 starter and World Series MVP want to start closer to "on time" (his last start was Tuesday, 4/28, when he sprained his ankle) so he can face his team's arch rival?

Hamels is the Phillies pitcher that gives the team the best chance of beating Johan Santana while he's on a roll. Cole stating that he "feels fine" but then resting for the next two days does not sit well. Surely, we all understand pitchers have routines. If Colbert's routine is to rest two days after his bullpen session, between starts, that's fine. We know he's shot down questions about pitching on short rest before. We remember that he once scoffed at potentially returning from an injury unless the team was fighting for a playoff spot. The problem with that is...again, the games count as much now as they do in September. Less rest now, when he "feels fine", means more starts by the Phillies' ace in the long run.

I want to root for players that are driven by competition and winning, not guys who are steadily focused on a routine. I am not exactly hating on Hamels, but I will fully admit that it would be plenty more difficult to like how he operates if he wasn't the NLCS and World Series Most Valuable Player.