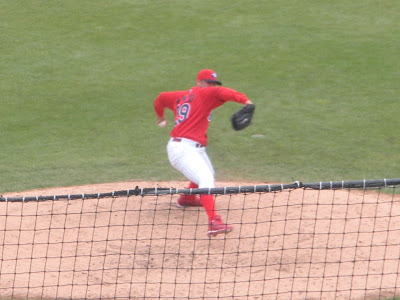 JC Romero was nice enough to take some time today to answer some questions after his "rehab" appearance in Lakewood. Romero threw 2 perfect innings against the West Virginia Power, the Pirates' single A affiliate. Here are JC's comments...
JC on today's appearance-

I felt pretty good. I had a good sinker working today. I felt a little sluggish. Ya know, I think it was a little early (11:05am game). I'm not accustomed to throwing early. I felt good, but I wasn't as sharp as I wanted to be. Even though my sinker was moving, I was disappointed with my breaking pitches.
On whether he had a pitch count today-

Not really, just two innings. Just trying to get the feel for the game.
It was a good outing overall.
On his pitching schedule between now and June 3rd, when he is eligible to return-

Twice. I'm going to Lehigh Valley- Saturday, Sunday...and, going back to back days. But today was the only day that I'll have actually pitched two innings.
On if he's ready to pitch with the Phillies-

I've been ready since the World (Baseball) Classic. You don't understand, I've been ready...I was hoping that something would have happened with my suspension where I could be reinstated a lot quicker. Unfortunately, that didn't happen.
On what he's missed most during the suspension-

(Laughs) Honestly, just being- on a serious note, being on a team...with my teammates and stuff like that. On a joking matter- my paycheck!
Overall, just being there. Being there and doing what I know. Ya know, doing what I love to do, which is play baseball.

It's a very tough situation, and I keep saying over and over, it's very hard to look in from the outside and point fingers at us. But it's very hard being here and walking in my shoes. It was a terrible situation. But I think that this will make me stronger, and definitely educate me a little more. And I'll be able to educate the youngsters. And, at least, from my work ethic stand point, I'll let them know how I go about my business. So, I mean, everything happens for a reason in life. And I, really, for the longest time, I couldn't find out why this was happening to me. But now, when I come over here, I see the guys and I see them paying attention to everything I do, at least I'm...turning something that can be very, very frustrating into something positive (by educating them and setting a proper example).
They have to understand that what is normal for everybody else, sometimes can be a problem for us. Ya know, everybody else can walk into GNC, with no problem, buy a supplement to better themselves, but if we do and we come up with the wrong supplement, we could look as cheaters.
On whether he's gotten any apologies from the players' association, the physician he consulted, or even GNC...his outlook, then more about what he's trying to teach his rehab assignment teammates-

Nah. We're still in a battle, man. We got a couple law suits going out there. The whole thing has been a mess from the day that it happened. And the sad thing is that, knowing that everybody knows my case is totally different to what is happening with a good friend of mine, Manny, what happened with A-Rod, and all that. But, ya know, life is not fair. Sometimes things happen in life, and you can't even explain it, you can't expect it, I mean things happen, so this is just a bump in the road. You have to keep your head up and keep on battling. Like I say many times, and I stick with it- in the end, you gotta really protect your career. And that's the message that I'm trying to tell these kids (the minor leaguers)...there's no union, there's no MLB representative, commissioner...nobody's going to protect your career. You gotta do it yourself. 'Cause when everything's said and done, you get suspended and you're just by yourself. I learned that the hard way, and now I'm just moving forward.
On his most memorable pre-professional baseball moment-

Oh, my gosh...I'll say back in college, my junior year, when I didn't know what was gonna happen- if I was going to pitch or if I was going to hit. I was playing outfield and I hit a ball over the lights, at the University of West Florida, and I stood up at home plate thinking that I was Ken Griffey Jr. And I got drilled the next three at bats.
So that's the most memorable thing that happened to me. Now I look back and I joke about it.
On who his favorite pitcher was, growing up-

I have to say Nolan Ryan, man. The swagger, what he brought to the game, was great. I love it.

On his favorite city to visit on the road-

Chicago. My wife loves it too...they have good restaurants.