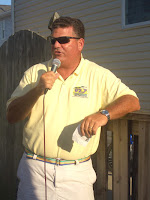 This week, Shore Sports Network's Kevin Williams took some time out of his busy professional radio duties to answer some questions about baseball and his lengthy career. Thanks to Kevin, who is quick and to the point, for the most part. Kevin is a Metropolitans fan, by the way.

1. Kevin, Cole Hamels speaks the truth. He gave an interview where he confirmed that he thinks the Mets are choke artists. As a Mets fan, can I get your rebuttal to such a statement?

(He's an) immature jerk who will regret the comment. The simple difference in the teams this year was the Mets lost Billy Wagner and the Phillies had Brad Lidge healthy for the season.

2. You suspended your Fox Sports 1310 AM blog once the Mets fell short at the end of the 2008 season. Do you have any intentions to start it back up, or will someone else be taking your spot? If you are discontinuing your page...who can take the most credit- the Brewers, the Phillies or the Mets?

3. You formerly hosted the afternoon drive time show, The Locker Room, on Fox Sports 1310 AM. You now have an new show that will be debuting soon on sister station, WOBM. Can you tell us about that?

Not a sports show....more general in appeal. Still putting together.

4. What other terrible teams do you root for?

5. What departing Met would you most like to have return in 2009...Pedro, Oliver, Moises, Easley? Why?

Oliver is big....pitches well against good teams when it counts.

6. The last Phillies/Mets trade that I can remember involved Juan Samuel, Len Dykstra and Roger McDowell. Play Omar Minaya. If you were trying to make a fair trade with the Phillies, who might you target and maybe try to lay out a deal that could make it happen...?

I will give you Luis Castillo for Chase Utley....take it or leave it.

7. The Mets signed the Mariners closer JJ Putz this offseason to pitch in a set-up role. His jersey will be greatly appreciated at Citizens Bank Park in 2009, as his name will help to properly identify visiting Mets fans. You don't have to say anything. I just wanted to state that I will thoroughly enjoy Mets fans labeling themselves as "putz".

Just remember it was only a couple of years ago when there were more Mets fans at Citizens Bank Park than Phillies. That day will return.

8. Have the Braves improved enough to make the NL East a 3-team race?

Braves are better, but it's still two teams.

9. What have you liked best about covering and broadcasting sports, over the years?

Watching those high school players like Al Leiter and Keith Elias work their way into the pro's and still maintain their local ties.

10. You've been honored as NJ sportscaster of the year nine times. Let us know what that means to you and, maybe, fill us in on any other achievments you've had in your career.

It's nice, but frankly there is nobody else in NJ. Biggest honors were being inducted into the Hall of Fames at Central Regional High School and OCC. (Ed. note...would the broadcasters for the Nets, Devils, Giants, Jets, Somerset Patriots, Trenton Thunder, AC Surf, Rutgers, and so on, agree with such a remark?)

11. Can we get a wager going on the Metropolitans vs. the Phillies this season? I was thinking a little something like this...Phil & Mets play 11 times prior to the all star break. We each pick our team, of course, and the loser of that 11 game stretch wears the winning team's cap, and hosts the victor at the winning team's ballpark, during the second half. Whaddaya say?

Will never wear anything from Philadelphia outside of a pretzel or cheese steak. (Ed. note...I am disappointed there was no counter wager. Pretty weak response. And why is Kevin trying to wear yummy food?)

12. Every Phillies phan's phavorite (or something like the exact opposite of phavorite) Met is Billy Wagner. It wouldn't be smart of me to let you off the hook without bringing him up (even though you ended up touching on him, in a previous answer, after I had typed all my questions out to you). Say something about him....now!

How come guys like you don't talk about the years (many of them) when the Phillies sucked and the Vet or CBP was like a morgue? Every Phillies fan likes to think they have been great for years but we know that's not the case. You are the World Series champs but Philly fans live in the shadow of New York and always will.
(Ed. note...since Kevin asked me something, let's look at it like this- there's a married couple who had it rough for a considerable while. The past two years of their relationship have been outstanding, wildly passionate and very happy. Would it make any sense for that couple to just toss out memories of the crappy ol' days, just for the "whoop-de-whoop" of it? Answer- Aw, naw! Hell naw, boy!)


This was a rather enjoyable exchange, even though Kevin didn't seem to have as much fun with it as I did. Hopefully, he'll visit with us again during the season. Here's to another fun filled year for all the "guys like me"!

IRONPIGPEN said…
I think that is excellent. I saw the Mets have a guy named Putz. I thought they were all putzes, to be frank. That would be great if this guy got sent down and comes to Cola-Cola Park. He'll get a warm reception, all right...
January 30, 2009 at 7:50 PM

Anonymous said…
Who is this guy??? I think he must be on some serious drugs to think that there will EVER be a day when there are more METS Phans in Citizen's Bank Park then there are Phillies Phans! LOL Come now guy...put down the crack pipe...