By Jay Floyd January 22, 2009
CBS3.com has enlightened the Phillies world to the genius that is new GM Ruben Amaro Jr. In the steal of the century, the Phils have apparently signed outfielder Jayson Werth to a $10 contract. Wow!

If you catch this soon enough the headline blunder is still there, but if not, here's a screen capture of the dealio. 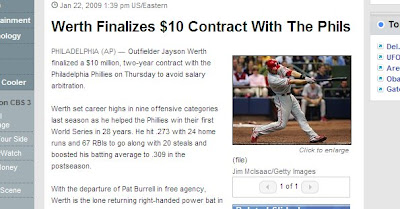