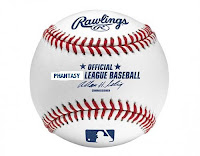 It's January, and for me that means prep time for fantasy baseball. It's true. I really do start running scenarios and draft strategies in my head this early. January is a good time for that. My fantasy football teams have usually recently made an early exit in the playoffs, and my fantasy basketball teams tend to be struggling at this stage. As I've now just traded away my prized power forward, as a desperation move in my salary cap auction hoops league, just about all that will calm my nerves is looking forward to fantasy baseball. While the other sports tend to stress me out, fantasy baseball soothes me. I don't always win, as my uncle will testify to, but I always enjoy it.
My yearly interest increase in the fantasy game coincides with the releases of various fantasy baseball magazines and guides. The Sporting News annual Fantasy Source guide is on news stands, and Phillies phans should be pleased to know that in the Sporting News experts' mock draft, three Phillies were selected in the first eleven picks. Chase Utley was taken 6th overall, Jimmy Rollins 7th, and Ryan Howard 11th. It is quite odd to see Howard, the league leader in HR and RBI, not in the top 10, but perhaps some of the experts in this draft were voters for the National League MVP award in 2008, since Howard was snubbed there also. Utley is a surprise to go so early, but it seems the news of Ch'Utley's hip surgery broke the day this draft began, so consideration for the injury was not given. J-Roll's drop in numbers in 2008 did not deter one drafter from taking the phormer MVP in the first round. This selecta' is looking for a big rebound year from Rollins.
The Sporting News' first three rounds of selections (top 36 picks) look like this...
1- Hanley Ramirez, Alex Rodriguez, Albert Pujols, David Wright, Matt Holliday, Chase Utley, Jimmy Rollins, Grady Sizemore, Jose Reyes, Ryan Braun, Ryan Howard, Josh Hamilton.
2- Miguel Cabrera, Carlos Quentin, Johan Santana, Brandon Phillips, Tim Lincecum, Prince Fielder, Mark Teixeira, Ian Kinsler, Carlos Beltran, Brian McCann, Manny Ramirez, Lance Berkman.
3- CC Sabathia, Jake Peavy, Cole Hamels, Justin Morneau, Alfonso Soriano, Carlos Lee, Josh Beckett, Evan Longoria, Brandon Webb, Dustin Pedroia, Jonathan Papelbon, Roy Halladay.
Other Phillies worth mentioning in this mock draft's top 100...Shane Victorino 67th overall, Brad Lidge 77th overall, Raul Ibanez 99th overall. Lou Marson is also in the Sporting News Bible as the #21 top prospect. They think Marson has a serious shot to win the everyday catcher job by the end of 2009. Carlos Carrasco is also on the prospect list at #37.
If any of you readers out there who don't already play against me in a fantasy league would like to step up, make sure you drop a comment on this post. CHAL-ONJ!