By Jay Floyd January 27, 2009
So many top level talents are still free agents this offseason. Andy Pettitte finally signed an incentive laden deal with the Yankees yesterday, which can be worth as much as $12 million, but as little as $5.5 million. With under 3 weeks until pitchers and catchers report for spring training, have a look at the big names who are still available. 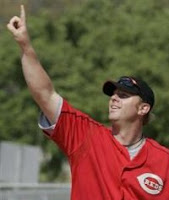 Tom Glavine, surely another HoF lock
Ben Sheets, has talent but is an injury concern
Oliver Perez, lefty has big K potential
Jon Garland, multiple 18-win seasons in this guy's career
Pedro Martinez, yes ANOTHER sure Hall of Famer on this list!
Randy Wolf, solid lefty and a former all star with our Phillies

Infield/DH-
Nomar Garciaparra- former all star, versatile fielder
Frank Thomas- 500-HR club member, still has power
What does this weak market mean for players? Some insiders have proclaimed it's collusion by teams to drive down the values of players. I can't say I disagree with that sort of collusion. When the guy (Ryan Howard) who set the record for highest salary awarded in an arbitration case, just last year, at $10 million, comes back the very next season and asks for 80% MORE than that record, it's very telling that some players' concepts of their own values are way off.
Waiting it out for discounts is smart for the teams and owners. With just a few teams suited as fits for a guy like Manny Ramirez, there are even less teams who could actually afford him. Possibly the only one on that list is the Dodgers. The Dodgers offered Manny a contract at the winter meetings (2 yrs, $45 million), which was rejected, and now a newer offer would likely be lower than, considering the dwindling options for Ramirez.
When asked, executive director of the players' union, Donald Fehr, won't comment about collusion, but says he'd be surprised if a market advantageous to the players didn't develop.
Players listed above who don't sign with teams in the coming weeks probably won't feel pressure to sign on for bottom dollar deals in order to get a pay check either. These are mostly guys who've gotten huge deals in their pasts, and are already millionaires. An in-season free agent market could be something that develops in 2009, like it never has before. Starting pitcher Paul Byrd has already announced his intentions to take the first half of the season off, and then make himself available to sign mid-season and help a contender. This is the way that Roger Clemens operated in the final years of his career. We could see more than a few guys using this strategy to their advantages this year. If the right market doesn't develop for players such as Bobby Abreu, Pedro Martinez, Tom Glavine and Manny Ramirez, before April, these free agents could be setting their own prices once again as the playoff races develop during the 2009 season.

GM-Carson said…
Good post. I'll be doing an All-Star Free Agent team sometime in February on More Hardball. The pickings will likely be slimmer then.
January 27, 2009 at 5:04 PM

IRONPIGPEN said…
Good point that these guys have already hauled in big bucks in the past and can literally afford to be patient for the deal they want.
January 27, 2009 at 8:16 PM

Amanda said…
D-Backs just signed Garland today. Surprising Manny, as well as other future HOFers are still out there. Abreu has said he is going to "lower his expectations" moneywise.
January 28, 2009 at 6:02 PM