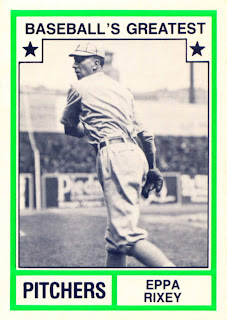 I got a lot of baseball books for holiday gifts and as I read through them, I find many remarkable stories. These have inspired me to share and teach some Phillies history.

Who has heard of Eppa Rixey? I hadn't either.

Eppa Rixey was a Phillies pitcher during the 19-teens into the 19-twenties. In 1916, Rixey had a break-out season, when he won 22 games for our Phillies and had an ERA of 1.85. The tables turned the following season. In 1917, Eppa Rixey's record was 16-21. His high loss total was mainly due to a lack of run support. There was one stretch when Rixey lost 5 straight starts, while the Phillies offense could only amass 3 total runs in those 5 games. Rixey even threw 4 shutouts that season.

The tales of this solid pitcher not being able to shine continued. Rixey served in the military in 1918, and saw action in World War 1. He returned in mid-1919 to put up a 6-12 record. But in 1920, Eppa led the National League with 22 losses, despite completing 25 of his 33 starts! The Phils scored one run or less in 11 of his 22 losses that season.

Following that season, the Phillies traded Eppa Rixey to the Cincinnati Reds, where he was reunited with phormer Phillies manager Pat Moran. The Phillies were making terribly miscalculated trades long before Ryne Sandberg and Scott Rolen.

Rixey's career was fully rejuvenated by being reunited with his former mentor. Rixey threw 300 innings, or more, for three straight seasons with Cincinnati. in 1922, Rixey led the NL in wins, with 22, and he went on to reach 20 wins, or better, in two of the following three seasons.

Eppa Rixey remained a Red until 1933. When he retired at age 42, Eppa held the record for wins by a left-hander at 266, until Warren Spahn broke that record in 1959. Rixey was elected to the Baseball Hall of Fame in 1963, and passed away one month later, before he could attend the ceremonies.

*Yes, I am aware I am posting this Sunday School entry on Saturday. Whoopty-doo-da! Sue me...?

GM-Carson said…
I have a side project blog that I'm looking to get more exposure and I've just added a co-author that going to help me keep it fresh daily. If you could just exchange links with us that would be great. Let me know and I'll return the favor pronto.