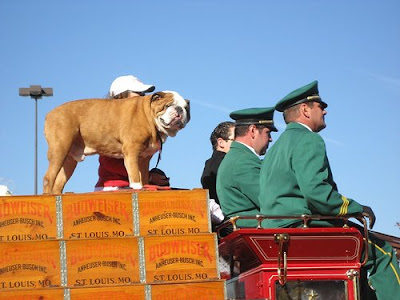 Folks, it's time to bid goodbye to Elvis Burrell. The strapping 115 pound English Bulldog is headed to St. Petersburg, Florida with his daddy, phormer Phillie Patrick the Batrick. Pat recently signed a deal to play baseball with the American League champion Rays. Elvis decided it would be a fine idea to join Pat as he begins this new chapter in his professional career, so Poppa-Pat feels as comfortable as possible. It's very remarkable for children to stand by their aging parents as times and living situations change.

In recent years, Elvis became a staple at Phillies phunctions. He was seen at the team's family days, in the clubhouse on game days rocking a jersey with his family name on it, and he'd even partake in spring training. Elvis became such a staple in the Phillies phamily, that the Phillies asked Elvis to lead the World Championship parade on a Budweiser wagon pulled by Clydesdales. Elvis's parents, Pat and mommy Michelle, joined him aboard that wagon to lead things off, in grand fashion.

Elvis in the past has hated Florida, but was won over by the terrific Rays fans and their stadium during the

2008 post season. The hatred began when Elvis was discriminated against for his weight. Daddy Pat's condo association at Clearwater Beach, near the Phillies' spring training home, tried to enforce a 40-pound weight limit on canine residents. This forced the Burrells to relocate. Another thing that bothered Elvis about Florida was the summer heat. Tropicana Field's air conditioning is an easy remedy for the sticky temperatures and humidity.

On his way out of Philadelphia, Elvis wagged his butt nub at the Phillies, their phans, and his bitch Priscilla. There's an age difference between the two, and they've been having some trouble lately. The ex-couple will share custody of their daughter, Lisa Marie.

Elvis has left the building...known as Citizens Bank Park. However, Elvis will return April 3rd and 4th for the final preseason games, also known as the On-deck Series, when his dad's new team visits Philadelphia for a World Series rematch.

Anonymous said…
This is hysterical! Good luck Elvis...we'll miss you!!!