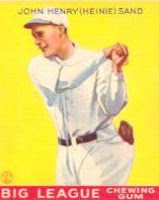 Are you aware that the Phillies once had a shortstop named Heinie? Oh, well they did. From 1923-1928, John Henry "Heinie" Sand played up the middle for the Phils. Heinie was a popular nickname in MLB, during the early 20th century, for players of German descent.

Sand is best known for his role in exposing a betting scandal in 1924 that implicated an ex-Phillie. Late that season, the Phillies were out of the playoff hunt, but the Giants were locked in a tight pennant race. Prior to a game, with 3 days left in the season, Heinie Sand was approached by Giants reserve outfielder, Jimmy O'Connell. O'Connell and Sand knew each other from their youth, as they both grew up in San Francisco. O'Connell offered Sand $500 if he "didn't bear down too hard". The games were all crucial for the Giants at that stage, but Sand refused and notified the Phillies manager, Art Fletcher, later that night. An investigation followed, and O'Connell would later confess and implicate Giants teammates in the bribe attempt. As a result, Jimmy O'Connell and Giants coach (and phormer Phillie) Cozy Dolan were both permanently banned from baseball by Commissioner Kenesaw Landis.
Heinie Sand played in 848 games over 6 seasons for the Phils. He batted .258 with 18 homers in his career. In 1925, at age 27, Sand made 60 errors in 143 games at SS.
------------
The Phillies interest in an additional righty bat continues. Ty Wigginton has been added to the list of guys like Mark Grudzielanek, Nomar Garciaparra, Rich Aurilia and Moises Alou who interest the Phillies.