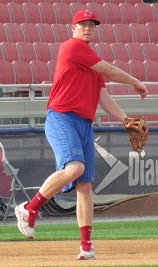 Fans, join us in welcoming Phillies 3rd base prospect Cody Asche aboard, as the 22-year-old will be taking time throughout the preseason to share his thoughts directly from big league spring training.

Selected in the 4th round of the 2010 amateur draft, Asche debuted that year, playing with the short-season Class A Williamsport Crosscutters.  After an unimpressive debut campaign in which he batted .192 with two homers and 19 RBI in 68 games, the lefty batting Asche spent time in the Florida Instructional League, picking up some key hitting tips from then minor league hitting instructor Steve Henderson, who is coaching with the big league Phillies this year.  Considerable strides were taken, and the youngster made quite an impact in the Phils system last year, posting a .324 average with 12 home runs and 72 RBI in 130 combined games at Class A Advanced Clearwater and Double-A Reading.

As the new season approaches and the 6-foot-1 180-pound Asche strives to stand out among a host of veteran infielders in front of Phils brass and coaches, he'll be checking in regularly to offer his personal insight and feedback directly from Clearwater, FL exclusively for you, Phillies Nation.  Read ahead for the initial volume of The Cody Chronicles.


Describing the first few days in camp with the big leaguers...

"I wouldn't say it's like a dream come true, or anything like that. It's what you work for, so it's good to be included in that group (of players). Right now, my hitting group, as far as big leaguers go, I have Ryan Howard, Laynce Nix and Yuniesky Betancourt.  Zach Collier and Ender Inciarte are also in my batting practice group.  For defensive work, it's pretty split up between the guys that are in the big leagues and the guys that are kind of fighting for jobs.  Sometimes I am with people at third base, sometimes I am by myself.  It depends."


On being drafted out of the University of Nebraska just about 20 months ago and if he ever thought, at that time, that he could progress at such a rapid pace to be where he is, in Major League spring training, today...

"I would never have (thought that). You know, after I was drafted, one of my coaches was Darin Erstad there, and he was a 1st round, 1st pick overall, and I would always talk to him about how he progressed and I would say, 'Man, you're lucky. You went up so fast.' And now, looking back on (the pace I've progressed), this past year has kind of been a whirlwind."


On if the big league players are open to helping out the younger players...

"That's one thing I've been surprised about...everybody's really approachable.  If you need advice, or you have a question for the big leaguers, I haven't had a question turned down yet that I've asked, or had anybody stand me up if I've tried to approach him.  Everybody's been real great so far."


Speaking about the veteran 3rd basemen, Michael Young and Kevin Frandsen, that the Phils have in camp...

"I've been around Frandsen a little bit.  I haven't done any work with him or Michael Young yet though.  You know, I've just chit-chatted in stretch lines and things like that.  Just small talk really.  I haven't worked with them much at all.  But, from what I see and from talking to them, they're both great guys."


On what the normal day of work consists of and what type of leisure activities might follow...

"The days are pretty long.  The typical day, I wake up around 5:45 (AM), get to the park around 6:15-6:30. My group, some of the younger guys, we have some of the earlier times in the weight room, so we're there 7-7:40.  And then we have early work and then we go through the day and I'm usually leaving the field around between 1 and 2 (PM).  As far as down time and winding down, I play a little golf, but I'm not a huge golfer.  My roommates, Adam Morgan and Ethan Martin, and I have Netflix at our place, we have video games.  So, we usually like to lay low at the house.  We don't like to move around too much after a day (of working out).  And I'm not a big beach guy either, so you won't find me soaking in the sun down here."


On the type of impact the coaches have had on him in spring training thus far...

"The coaches have all been great.  I may not be one of the top priorities or what-not, I don't know, but they sure make you feel like you're there for a reason and spend time with you.  (Ryne) Sandberg's always out there, watching me do ground balls, working with me.  (Steve Henderson) is always around when I'm hitting.  Wally Joyner's been great too.  When I went down there early, I got to hit with him a lot, because he would do flips in the cage.  And then, Andy Tracy's been around a lot.  I didn't get to work with him too much before, because he had a position with Williamsport.  That's what's great about the organization, all the coaches.  They really take time and make sure, if you're there to work, they're gonna be there for you.  That's why we have such a great developmental system with the Phillies."


Reacting to Charlie Manuel's thoughts about Asche from a recent interview...

"It's pretty cool to hear about that kind of stuff.  It just goes forward, building a relationship with the guy, more or less, you have something, your familiarity with each other before that first meeting.   Charlie's a great guy.  I got to meet with him in Philly, when we were there for the prospect seminar and we got to talk to him for almost, maybe, a couple of hours one day.  And right in spring training, he remembers who you are and says hello.  He's a great guy and I feel comfortable being around him and I've never even played for him, so that just shows how great of a guy he is."


Check back in the coming weeks for more from Cody and remember to follow him on Twitter.

-OBC said…
Good stuff from Asche. I want to see the kid do well this spring.