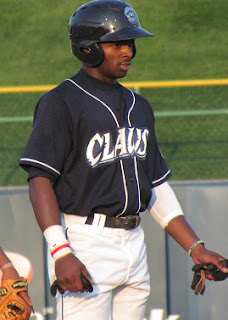 Last year, outfielder Zach Collier finally made the kind of impression the Phillies had long hoped for since they made him their supplemental 1st round draft choice (34th overall) in 2008. As a member of the Class A Advanced Clearwater Threshers, Collier put forth exceptional output and followed up the regular season with a tremendous campaign in the highly competitive Arizona Fall League, to display the type of skills that earned him high praise and a hefty professional signing bonus as a high school talent.

Following his 2011 season, it was announced that the 6-foot-2 185-pound Collier had tested positive for amphetamines and would have to serve a 50-game suspension to kick off the following season. That down time didn’t hold the Carson, CA native down, however. In the Florida State League last year, Collier, who once got a signing bonus of over $1 million from the Phillies, posted career highs in OBP (.333) and slugging percentage (.399). Despite missing time due to the suspension, Collier sported a .269 average with six home runs, 32 RBI and 11 stolen bases in 78 games for Clearwater.

In order to make up for some of that time missed, the Phillies sent Collier to play with Peoria in the Arizona Fall League, where he slapped four doubles, laced three triples and stroked four homers while placing in the league’s top five in batting average (.371) and OPS (.993).  Collier feels the time spent in the AFL was advantageous to him and he is grateful for the experience.

Prior to last year, Collier, who possesses a smooth stroke from the left side, tallied just two home runs and a .242 batting average in three pro seasons. He missed the entire 2010 season following a series of injuries, including two (a broken right hamate bone and a torn tendon in his right wrist) that required surgery.

On defense, Collier has range and great instincts. He played all three outfield positions in the AFL last year and has played mostly right and center during regular season action. His arm doesn't stand out greatly, but is capable of keeping runners honest.

Speed is certainly a weapon at the 22-year-old's disposal. He stole 20 bases in 2009 and swiped 35 in 2011 after returning from surgery. With a regular season success rate of 76%, Collier hasn't shown his best efforts in that department yet.

Another strength for this youngster is his determination.  Collier, who is extremely goal oriented, always has hits sights set on the next level and improving every aspect of his own game.

Now, as a member of the Phillies’ 40-man roster, Collier is primed to really display his talents and should begin the 2012 season with Double-A Reading. If Collier continues to progress at the same pace he showed last year, the big leagues will be in his future.