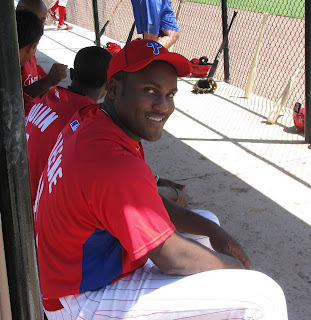 Larry Greene Jr., quietly began his ascension upward in the developmental ranks last season, after being selected in the supplemental 1st round, 39th overall, by the Phillies in 2011.

In his senior year of high school, the lefty batting Greene became an All-American, posting a .536 average in 30 games with 11 doubles, 19 home runs, 52 RBI and 37 walks.

Greene worked out with the Gulf Coast League Phillies late in the 2011 season, after signing his first professional contract, which came with a reported $1 million signing bonus.  He also spent some time at the Florida Instructional League as well that year.

Despite sitting out a good deal of time at Instructs with a groin injury, the slugger was able to take in plenty of batting practice and put himself on display for the brass in attendance, who were there to see many of their newly drafted prospects.  The ailment resulted in some downtime through the winter months and Greene wasn't in the best shape when he reported to spring training in 2012.

That year, his first season in pro ball, Greene spent time in extended spring training getting into a more acceptable playing shape.  Once the short-season New York-Penn League kicked off in June, Greene looked capable at the plate against the league's competition.  As a member of the Williamsport Crossercutters, though, his reputation for having big time power seemed exaggerated, as the 19-year-old launched just two homers.  Greene's .270 average with 22 doubles and 26 RBI in 70 contests were promising, however, and because Williamsport's home park, Bowman Field, is notoriously difficult on hitters, no one is fretting over his low power production.

While Greene's strike out rate was much like that of a very young power hitter that's new to the minors, at over 25%, he has been praised for his plate discipline, as he tallied a very good overall walk rate of 13.7% in his first year as a pro.

On defense, Greene is solid, covering enough ground to hold his own in the outfield.  Additionally, the 6-foot 235-pounder's speed is average and not on the slow side at all, as some may expect of an individual with his larger frame.

Expect Greene, who turns 20-years-old next week, to begin the coming season with Class A Lakewood.  The Phillies have high hopes for the youngster who should begin spring training in better physical condition this year, after spending the off-season fully healthy.