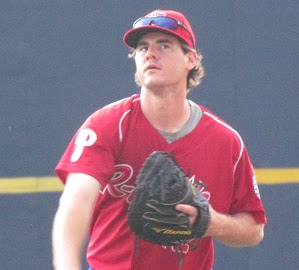 Tommy Joseph, who was acquired from San Francisco in the Hunter Pence trade last July, quickly landed among the Phillies' top positional prospects upon joining the organization.  Joseph now rounds out a collection of young talent that has the Phils extremely deep at the catcher position in the minors.

The 6-foot-1 215-pounder, was the Giants' second round draft selection (55th overall) in 2009.  Upon making his professional debut the following year, Joseph played with Class A Augusta of the South Atlantic League.  That year, with the GreenJackets, Joseph posted a .236 average with 16 homers and 68 RBI in 117 games.

In 2011, Joseph batted .270, smashed 22 home runs and drove in 95 runs in 127 games for Class A Advanced San Jose. Over the off-season that followed, he was ranked as San Francisco's 5th best prospect by MLB.com.

An All-Star in the Double-A Eastern League in 2012, the righty hitting Joseph tallied a .257 average with 11 home runs and 48 RBI in 108 games between Richmond and Reading.  Joseph spent a month this past off-season playing in the Arizona Fall League, where he sported a .204 average with one double, five RBI in 14 games played.

Overall, Joseph, who grew up admiring All-Star catchers Mike Piazza and Jorge Posada, is an aggressive batter that can really drive the ball.  In his past two seasons, Joseph sports solid marks in OPS (.758) and ISO (.173).  Having displayed power at multiple levels, many feel that the 21-year-old projects to be a 20+ home run guy.

Defensively, Joseph, who possesses a top notch work ethic, is strong behind the plate and is capable of leading a pitching staff and keeping the opposition's running game under control with his arm.  And while Joseph might reach the big leagues because of his bat, it will be his skills as a backstop that keep him there.

On the bases, Joseph runs like a catcher and will never be a true stolen base threat.

Currently, the Arizona native is in Major League camp with the Phillies and should get some solid reps in spring training games.  With Sebastian Valle expecting a light work load, due to a fractured finger, Joseph could get a nice chance to impress the entire organization with some extra playing time.  Having caught all of the Giants' aces last spring, Joseph may now get to see game action with the Phils collection of elite hurlers.

Look for Joseph to begin the 2013 back in Double-A, with Valle occupying the starting catcher spot at Triple-A, with both men possibly ready for the next level at any point.  The Phils' depth at the position could result either man being a trade chip this year as well.