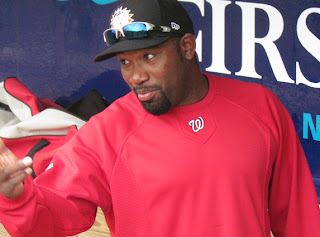 In the news recently, and covered by Atlanta's FOX affiliate, was a story of former Phillies second baseman Marlon Anderson's lost iPad being returned by an honest youngster.

Just over a week ago, 8th grader Mauricio Ayala was out shoppping with his mother and found Anderson's tablet left behind in a shopping cart at his local Sam's Club. Ayala, not the type to take advantage of someone else's misfortune, set out to return the item and sought the assistance of his school computer technician, Michael Ladd, who was able to identify the owner as Anderson, despite the device being locked.

During an impromptu ceremony at Ayala's school last week, Anderson rewarded the youngster with an autographed bat in exchange for his kind efforts.

Anderson, who also played with the Mets, Dodgers, Nationals and Cardinals, spent the 2011 season as a hitting coach in the Nationals organization, on the Class A Hagerstown Suns staff, where he coached Bryce Harper. To hear my full interview with Anderson from his time with Hagerstown, click here.

Another noteworthy plus from this story comes with the reuniting of Anderson with his Phillies teammate from 1999 and 2000, Ron Gant, who is a news anchor with FOX 5 in Atlanta.

See more details on Ayala's good deed as well as Anderson's meeting with Gant in the news clip in the embedded player below.