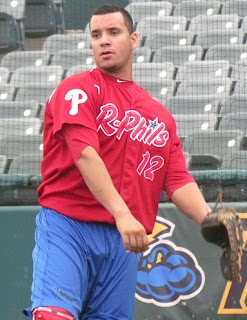 Sebastian Valle, a righty hitting catcher, has proven himself worthy of high praise during his time in the Phillies’ minor league system. Displaying considerable power and crucial skills behind the plate, Valle could be an option to help the big league club in the near future.

After signing as an international free agent at the age of 16 in 2006, Valle began his pro career playing in the Dominican Summer League, where he batted .284 and sported an .802 OPS in 54 games. The following year, Valle played with the Gulf Coast League Phillies and posted a .281 average with two home runs and 18 RBI in 48 games, helping the team lock down a championship.

In 2009, Valle split time between Class A Lakewood and short-season A level Williamsport. In 50 games for the Williamsport Crosscutters, Valle shined, posting a .307 average with six home runs and 40 RBI in 50 contests. In addition, Valle sported an .866 OPS with the ‘Cutters. With Lakewood, where he backed up eventual Roy Halladay trade chip Travis d’Arnaud, Valle batted .223 with a homer and 15 RBI in 45 games.

The 2010 season presented a chance to play more with Lakewood and Valle produced very solid numbers, as one of the leaders of the team’s offense. Valle began the year a bit slow, notching just a single home run in his first 40 games. Once he heated up, though, Valle slammed eight home runs over the next 18 games and kept it going through the remainder of the year. In 117 regular season games, Valle posted a .255 batting average, while mashing a team leading 16 homers and driving in 74 runs to help his club lock down its second consecutive South Atlantic League title.

With Class A Advanced Clearwater, in 2011, the 6-foot-1 205-pounder posted a .284 batting average with five home runs and 40 RBI on the way to becoming a Florida State League All-Star, despite dealing with a sprained thumb, among other ailments, that prevented him from driving the ball as he normally would.

Last season, Valle started out with the Double-A Reading Phillies, where he tallied a .261 average with 13 home runs and 45 RBI in 83 games before earning a promotion to the Triple-A Lehigh Valley IronPigs. With the Pigs, Valle struggled with his average, hitting .218, but launched another four homers in 22 games, which gave him a single season career-high in the category.

Valle, who is a strong, aggressive hitter, displays excellent bat speed and has shown an ability to really drive the ball during his time in the minors. The area where Valle needs the greatest amount of improvement is being more selective at the plate. His walk rate of 3.2% in 2012 and 3.6% in 2011 leaves a large amount to be desired.

On defense, the Mexican born Valle is athletic and has a quick release when throwing the ball to the bases. The Phils’ developmental coaches often rave about the youngster’s footwork and ability to move behind the plate. Valle’s quickness hopping on dribblers and bunts out in front of the plate has improved during his time in the minors as well. He has also taken strides in helping his pitchers with his “frame work” behind the plate.

His speed is fairly typical for a catcher. “Below average” is a suitable description of Valle’s movement on the base paths.

The Phils have loads of depth at the catcher position in their developmental ranks. Along with the likes of Tommy Joseph, Cameron Rupp, Gabriel Lino and others, Valle could find himself as a hot commodity on the trade market in the coming months, due to the amount of talented backstops in the organization including an All-Star at the Major League level in Carlos Ruiz. Where ever Valle might be playing this year, if he can show the same progress at Triple-A as he did at previous levels, he could be ready for a promotion to the big leagues this year.