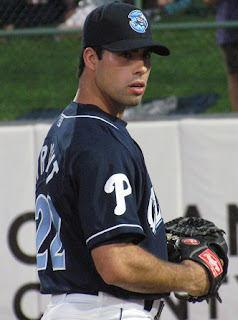 Selected in the 8th round of the 2011 amateur draft, lefty hurler Austin Wright quickly proved to be a fast rising prospect in the Phillies' organization.  Out of the University of Mississippi, where he posted a 4.73 ERA and an 8.57 K/9 mark through 14 starts that year, Wright never tired, continuing on for another 15 appearances primarily as a starter in the Phils' system.

After making his pro debut with the short-season Class A Williamsport Crosscutters and posting a 3-1 record along with a 3.38 ERA in eight games (seven starts), Wright was promoted to full season Class A Lakewood, where he continued to look strong, tallying a 1-2 record and a 2.67 ERA in seven starts.  Combined at the two levels, Wright, who grew up idolizing big league stars like Kerry Wood and Mark Prior, notched an impressive 11.2 K/9 mark.

Wright has a repertoire that features a low-90's fastball (regularly clocked at 91-92 MPH, but can reach higher), a tough curve ball that can leave batters looking foolish, a solid slider and a change up.  As Wright climbs higher in the developmental ranks, that menu could be refined, but, for now, he's sticking with the four-pitch selection.

One of Wright's key strengths is his command, which enables him to get ahead of opposing batters and take charge of at bats.  He also has a tight mental game, always staying focused on improving his approach and his knowledge of how to pitch in certain situations.

Previously drafted in the 23rd round by the Boston Red Sox in 2010, Wright chose not to sign and instead returned to Ole Miss for his senior season.

Wright used yoga, swimming, weights and basketball to stay in shape this off-season.  With the help of his off-season battery mate and all-year-round father Anthony, Austin is able to keep the rust off in the colder months by actively throwing as spring training nears.  Wright also spent time coaching youth pitchers this winter, which proved fulfilling for the 23-year-old.

Look for Wright to begin the 2013 season with the Double-A Reading Fightin' Phillies.  A promotion to Triple-A by season's end might not be out of the question, if Wright can continue to progress at such a steady pace.