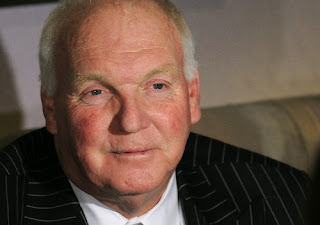 Phillies manager Charlie Manuel grows older each year, but you'd never know it from the gusto he exudes when talking about a new season ready to blossom. Decades of the baseball grind, thousands of miles worth of annual travel, countless ups and downs and the pressure that comes with coaching in the most demanding sports city in the nation simply don't take a toll on the 69-year-old.

Appearing at the annual charity winter banquet held at Lakewood, NJ's Woodlake Country Club on Wednesday, Manuel smiled and expressed considerable enthusiasm toward what's to come. The baseball lifer, whose days in pro ball date back to 1963, beamed as though he was slated to begin his coaching career instead of heading into what some deem as potentially being his final year leading a team, as his contract is up following the season.

Manuel, who is entering his ninth season as the skipper of the Phils, is excited about many aspects of the current team, despite finishing last season with an 81-81 record, their first non-winning season in a decade, and missing the post-season for the first time since 2006.

A surplus of outfielders is where Manuel will focus plenty of his attention this spring. He has high hopes for off-season acquisitions Ben Revere and Delmon Young, but players like Domonic Brown, Darin Ruf, Laynce Nix and John Mayberry Jr. will likely be trying to prove themselves worthy of a spot in the lineup. Manuel thinks the competition may bring out the fire in each man trying to land steady at bats. He also expressed eagerness toward getting to the preseason schedule, so he can begin figuring out the right outfield formula.

"I think we're gonna have some fun in spring training because all six of them are gonna get to play," Manuel proclaimed.  And there's things I like about every one of them and if we just get some consistency in the outfield, to me it doesn't matter who's out there, as long as they can perform and as long as we can score some runs.  We got some talent there to do it with.  I'm excited about it.  I want to get there and get it going and watch them play and see what happens."

Also, this off-season, the Phillies added a duo of hitting coaches in Steve "Hendu" Henderson, who previously served as the organization's minor league hitting coordinator, along with former big league All-Star Wally Joyner. Triple-A manager Ryne Sandberg, who was a Hall of Fame player, was also promoted to be the third base coach with the big league team.

According to Manuel, the team's collection of coaches will help the offense as well by improving the hitters' all-around mentality.

"I think between Hendu and Wally Joyner and Ryne Sandberg and myself, I think, and with Utley and Rollins and some of the guys on our team (who are) already good hitters, I think we should be able to establish an atmosphere where we love to hit and have a lot of fun. We'll be offensive minded and we'll really enjoy playing the game," Manuel stated.

Stressing the focus on the team's bats, Manuel said that the health of Chase Utley and Ryan Howard, two main cogs during the Phillies' five-year run of division titles, who were each injured for lengthy stretches last season, would be very important to the club. He also expressed that the addition of third baseman Michael Young was something the team needed. All three men are former All-Stars with substantial post-season experience.

It's not just the offense that will carry the Phillies in 2013, according to Manuel. There's another aspect of the roster that has the Phils' skipper fired up.

"We got a whole bunch of guys. We got (BJ) Rosenberg, we'll get (Mike) Stutes back, we got (Jeremy) Horst, we got (Raul) Valdes, we got (Antonio) Bastardo, we got (Phillippe) Aumont, and we got (Justin De Fratus), we got (Jake) Diekman. And if Adams is healthy and if he's slated in the 8th inning for us, we still can use Bastardo on lefties definitely, in the 7th and the 8th. And I look for the young guys, after about a month or two months after the season starts, you're gonna see our bullpen become a big time bullpen because we have a lot of talent," Manuel stated.

Add in enthusiasm about his starting pitchers as well as the depth of his infield and Manuel is more than happy with the current Phillies roster and thinks that things can certainly improve from last season's disappointing finish.

"The goal is always the World Series. We can do it. I want us to be better than we've ever been."

Speaking on the collection of prospects that were announced as non-roster invitees to spring training on Wednesday:

"I talked to them all last week.  I saw Asche hit in the Arizona Fall League on TV, in the All-Star Game, and that's why I watched the whole game.  He got a hit, hard line drive to right field, he looked like a good hitter.  He's a bigger kid than I thought he was on TV.  When I saw him on TV, I was guessing he was 6-foot or 5'11", but he's bigger and he swings the bat good.  And those other guys, that I met, they'll all get to play in spring training.  We'll play them all and we'll send some of our guys over and play minor league games and things too."

When asked how he felt about the signing of outfielder Delmon Young this week:

"I was excited (about Delmon Young) because I've known him quite a while.  I saw him in (the South Atlantic League) when he first signed.  I think he was with Charleston.  But he's a good hitter, he's a good clutch hitter, he's good with men on base and late in the game.  He's gonna help us. We're gonna go to spring training and play him in right field, get him back to the place on defense to where he was about three years ago."

-OBC said…
Charlie is great and all, but he has to say those things. He can't show up at the banquet and say- "We'll do our best with what Ruben gave me" or "Hopefully we can catch the Nationals".