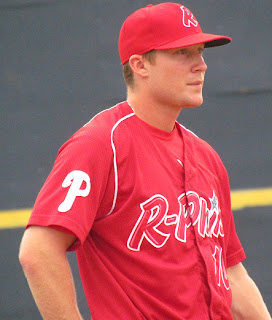 Phillies third base prospect Cody Asche is back once again to share his thoughts directly from inside big league spring training in Clearwater, FL.

The 22-year-old was a 4th round draft selection in 2011 out of the University of Nebraska.  Since then, Asche has ascended quickly up the developmental ranks.  Last year, in his first full professional season, the Missouri native posted a .324 batting average with 12 home runs, 72 RBI and 11 stolen bases in 130 combined games at Class A Advanced Clearwater and Double-A Reading.  Asche also followed that up with a .281/.343/.438 line with Peoria in the Arizona Fall League.

This year, Asche has landed in Major League spring training and is doing his best to make a lasting impression on the Phils coaches and brass while he's there.

In the latest edition of The Cody Chronicles, Asche discusses his thoughts on early Grapefruit League action, his impressions of Phillies fans, fitting in with the big leaguers and plenty more.  Read on for that exclusive insider content straight from Florida.


Cody shares his thoughts on the first few days of game action...

"It's been fun.  I sit on the bench for a few innings and watch a lot of big leaguers play and observe what they do, how they approach games in different situations.  You know, when you're not playing, you've got to always be in the game and learn stuff.  And, obviously, any moment they'll want me to go in, so I just stay prepared so I can go out there and play."


On whether he could take a hitless game or making an error harder during his first week with the big league club than he normally might in the regular season in the minors, or in college...

"Definitely.  When you're in my situation and you're playing the last four innings, you want to make the most of your opportunities.  It's not like the normal day, when you might have nine innings to do something or make your mark on the game some way or another, so when you do have- it's a little disheartening when you don't play as well as you know you can.  But, it's all part of the learning process and, you know, you just store those moments and learn from them, so they don't happen again."


On if there is any part of him that's in awe while watching elite ball players like Miguel Cabrera or Roy Halladay on the field...

"I wouldn't say I'm in awe, but it's fun to watch them go about their business.  I think it's good to be in this situation, so when the regular season starts, you won't really have that shock if you (reach the big leagues).  You've got to remember that, when you watch them, these are guys you're competing against.  They're part of your profession too, so you've got to keep yourself in check and not let yourself be in awe and get stuck watching instead of playing."


On what has been the most surprising thing to him in spring training...

"I would say how open a lot of the guys are in the clubhouse, to help you progress as well.  I would assume, going in, a lot of the guys would want to be kind of left alone and do their thing, but we're pretty lucky, us minor league guys that are up at big league camp right now.  There's a lot of guys who are great teammates who want to help us young guys learn and they're really open to questions and open to helping us all out."

"Not too much.  As far as pregame goes, when the games started, the starters, they're doing their stuff on a different field, so the reserves will go on a different field to do all their pregame work.  We've taken ground balls together and what not, but during that time it's just small talk and chit chat.
I watch him a lot when he's at third base during the games and in the five or six innings he plays, there's a lot of stuff.  You can learn a lot.  You don't always have to be asking a lot of questions.  When he's in the game and I'm on the bench and observing, you can pick up as much with that and that's what I've done mostly, is really observe."


On the Philadelphia fans in attendance in the early going this spring...

"It's normal Philly atmosphere, the way I see it.  They pack the park, they're there early, they all know who you are and it's great.  It's like any of the minor league parks.  They travel well.  They're always there and supportive.  They're really intelligent about their team and they know what's going on and it feels like a normal game."


On when he thought the possibility of being a professional ballplayer could be a reality...

"I wouldn't say there was an exact age where I thought I could really be a pro.  It was something I always wanted to do, growing up.  I would say maybe around after my sophomore year in college, after the summer, I started getting interest, receiving letters from different teams and that kind of just starts the whole process and once you get just a little bit of attention like that and you keep progressing, it becomes what you work for.  I mean, when you're in college, you don't want to look too far ahead and just play to become a pro, because you go there to get better, but it's something that I definitely want to do and I can't imagine myself doing anything else.

In the off-season, two weeks go by and I start missing it.  Even though the seasons get long and you want to have that time off, but for me, I took a week off in the off-season and I was itching to get back out there."


Check back for more from Cody right here in the coming weeks.