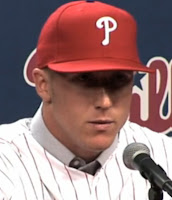 Last year's top Phillies draft choice righty pitcher Shane Watson did not see much action during his initial pro stint.  Many in the organization and around baseball are extremely high on the 6-foot-4-inch 195-pounder, as he possesses skills that earned him considerable regard and made him the 40th overall pick.

Pitching for Lakewood High School, located in the suburbs of Los Angeles, CA, last year, Watson posted a 4-3 record with a 1.19 ERA in 11 games. In 53 innings of work, he allowed just 36 hits while striking out 79 batters.

Watson wasn't the first player who attended Lakewood High School taken by the Phillies in the opening round of the MLB amateur draft.  Travis d'Arnaud, who played with Shane's older brother, Scott, was the Phillies' 1st round selection (37th overall) in 2007 out of Lakewood as well.

Although he was committed to pitch for USC, Watson signed his first pro contract, reportedly worth $1.3 Million, and later debuted with the Gulf Coast League Phillies in August.  Pitching no more than two innings per appearance, Watson tallied a 0-1 record with a 1.29 ERA over seven outings.  Additionally, he recorded eight strike outs while walking only one in seven innings of work.

Watson always pitches from the far third base side end of the pitching rubber, which presents a unique look for the opposing batter.

It was the compensation pick that the Phillies obtained for losing Ryan Madson to free agency that enabled the team to pick Watson.

The young, determined hurler is regarded for his strong 12-to-6 curve, which features great movement.  Watson's repertoire also includes a fastball that typically peaks at 94 MPH, but has been clocked higher.  He will also work to develop a solid third offering, likely a change up.

Clearly, the hopes for last year's top draft pick are high and a debut for him in the big leagues is surely not certain.  However, with an athletic frame, great velocity that has the potential to climb higher and a plus secondary pitch already, the sky is the limit for Watson, who should begin the 2013 season in extended spring training and see time with short-season Class A Williamsport this year.