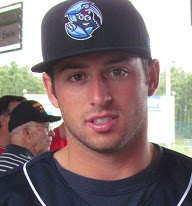 From the "Lost Tapes" files, I bring you a never-before-released interview with 2012 Phillies draft pick Zach Cooper.  The righty hurler was in the midst of an excellent campaign during his first season in the pro ranks, after the Phils selected him in the 15th round out of Central Michigan University, when I spoke with him in August.

Cooper, who turned 23-years-old this off-season, is aggressive on the mound, as he attacks the strike zone and goes after opposing batters.

After debuting as a pro, combined at two levels, with the short-season Williamsport Crosscutters and the Class A Lakewood BlueClaws, Cooper posted a 2-3 record with six saves and a 1.30 ERA while holding batters to a .183 batting average in 23 appearances.

Read ahead to check out my full interview with Zach, as he talks about transitioning from college ball to the minors, being selected by the Phillies and plenty more.


- Zach you're off to a hot start to your pro career.  I just wanted to get some thoughts from you on your early success here.

You know, it's been something that I kind of just turned in from college.  Just tried to get into a groove and I've been able to.  And I've had some outstanding plays behind me and stuff like that and great games called by the catcher, so it's kind of been me, but a team thing too.


- I know you pitched at Central Michigan and I wanted to see how you think your collegiate career helped you transition into the minor leagues.

I was drafted last year by the Marlins and I decided to come back (to school) and I just think that this last year in college was huge for me and to be able to come in and do what I'm doing now is just, you know- I've learned a lot in the past year with my pitching coach, Jeff Opalewski, and I think that was a big thing with the success that I'm having right now.

The decision, being drafted that late, the offer wasn't really what I was looking for.  I thought I was worth a little bit more than (what they offered).  All in all, I wasn't that sure, too, if- I got to play in the Cape last summer and I got to experience some good competition out there.  And I wasn't sure if I was exactly ready to go, so I kind of sat down with my coaches and my parents and I decided, "Hey, you know...I might as well be as ready as I can be for pro ball", so I decided to go back to Central and finish my degree and get all that stuff going and it turned out to be the best decision.


- Absolutely.  And now you're here.  Now, glancing at your college stats, it's clear you were mostly a starter there.  Now, in a relief role here, is there a preference for you at all, either pitching in the rotation or out of the bullpen?


- We eluded to you being drafted this year.  A lot of guys talk about tracking the draft, but at the same time, there are players who are in the midst of regional and postseason tournaments when the draft is going on.  Were you able to track the draft, how did you learn you were picked by the Phillies and how did you celebrate?

I kind of understood the process better (this year) after being drafted last year.  I was just kind of hanging out at home with my family.  We got knocked out of the conference tournament early, so I was able to be home for a little bit and just kind of relax and just enjoy it.  I was actually watching the draft a little bit on the computer and then the 15th round was the last round of the second day and I wasn't sure what was gonna go on, and having to watch all the way through and then the Phillies picked me.  From there, it was awesome.  A dream come true.


- Were the Phillies among the teams on your radar or was it a surprise when they selected you?


- Sounds good.  I took a look at some bio information on you and I noticed that your college major was sports studies.  What does that entail and what can you tell me about that?


- That sounds great.  Speaking of being armed with multiple tools, what's your pitch repertoire like and what do you consider your out pitch?

Pitch repertoire...fastball, slider, change up.  And I would consider my out pitch to be my slider.


- And what's your velocity like on the fastball and what is the drop off to the off-speed stuff?


- And just a couple more things...Coming up as a youngster, who were some of the players you looked up to as a fan, before turning pro?


- You've pitched in Williamsport and some cities on the road too, but what are your impressions of Lakewood thus far...the facilities, the fans, the community here?

The facility, the stadium, I haven't played anywhere better.  Being on the road here, I wasn't sure what to expect, coming into pro ball, but here you get 7,000 or 8,000 people and that's the most people I've ever played in front of.  The community support is awesome.  It's a great place.  And the fans, there's no better fans than Lakewood fans, so it's been awesome to be here.