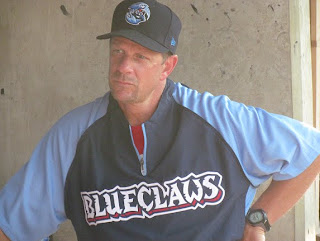 This week I spoke with Class A Lakewood BlueClaws manager Mickey Morandini regarding several matters related to his club.

21-year-old newcomer and Dominican native Felix Santos, a righty hurler, who has a 0.60 ERA through seven relief appearances with the BlueClaws:

"He's come in here and he's done a great job for us. Live fastball, breaking ball's been above average, he's getting outs. He's come in there and made a statement and pitched well and I think he's turning some heads here."

In the second half, I would put their numbers up against anyone's in the league. I think Franco might be leading the (South Atlantic) League in RBI's in the second half. They've come a long way, they've gotten comfortable here, they're doing it both defensively and offensively. They're driving in runs, they're hitting the long ball, they're getting hits. Those two have really carried us the whole second half and, you know, once (Chris) Duffy left, these two have picked it up even more and really, the reason why we're in (the playoff hunt) is because of those two guys."


Chris Duffy's effect on his teammates, before his latest promotion to Class A Advanced Clearwater:

"He had a huge impact on this team. I know when Ryan Howard came in, he had an effect on Duffy for a few days, just with preparation and how to take (batting practice) and things like that. And Duffy just put a presence in this lineup and Dugan kind of took off once Duffy got here and Franco got hot and for an older guy to come in here do the things that Duffy did, it was a big influence on some of the young kids and I think it's paying off right now."


This year's 11th round draft pick, Willie Carmona, who sported a .348 avg with 2 HR and 20 RBI in 25 games with the Gulf Coast League Phillies prior to joining Lakewood this season and has faltered a bit since jumping two levels:

"He had real good numbers down in the GCL, and he struggled here early. He's starting to come on a little bit now. We're just working with some things with his swing a little bit. He's a little bit flat footed at times and he doesn't get a good load, so to speak, from a hitting stand point, but we're been working on that. And his at bats have been a lot better the last handful of days and, you know, he's got some skills. He's powerful, a big strong kid that can drive the ball and, to boot, he's a switch hitter and that only makes him that much move valuable. So, like I said, he's gotten better and we're gonna need him to drive in some runs and hit some doubles and things like that and kind of protect the Franco's and the Dugan's that are hitting in front of him."


This year's 15th round draft pick Zach Cooper, who has posted a 1-1 record with 4 saves and a 0.53 ERA in 12 games since joining the BlueClaws:

"He has also done a great job here. Real aggressive in the strike zone with a good, live fastball, real good change up. He's kind of settled into the closer's role for us, once some of the other kids left here, especially (Kenny) Giles. He's come in here and made an impact, an impression too. I think he's turned some heads with how he attacks the strike zone and going after the hitters. He's been rewarded by going to the instructional league, so that's a big thing."
________________________________________